Revealing the New Paradigm of Abortion at the 2018 Convention

Massachusetts Citizens for Life held its 2018 annual convention on Saturday, March 24, 2018, gathering dozens of pro-lifers from around the state to learn more about what is really happening in abortions today. While fewer and fewer abortions are being performed every year in the Commonwealth, there are new ways in which the lives of the unborn are threatened, new attitudes among people about life and abortion, and a new need to approach both mother and child as being under threat and in need of our love and care.

The event was graciously hosted by Cardinal Spellman High School in Brockton, and everyone there were so very helpful and made the day go so smoothly in their accommodating facilities. We are very grateful to them for welcoming us.

MCFL President Anne Fox began by welcoming attendees and sharing research prepared for the convention on the state of abortion in Massachusetts. 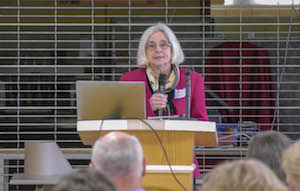 Marianne Luthin, director of the ProLife Office of the Archdiocese of Boston, shared more encouraging statistics on the decline in the number of abortions. Nationwide, the rate of abortion (abortions per 1,000 women) has dropped to 50% lower than pre-Roe v. Wade. (Abortion was already legal in some states before Roe, including California and New York). But she also noted that we have be aware of the increasing numbers of chemical abortions.

Marianne added that millennials are having fewer abortions and are increasingly likely to identify as pro-life. From 2008 to 2014, abortion by adolescents dropped 32%.

Marianne then led a discussion of the statistical profile of a woman seeking an abortion and how it’s changed from years past and finished with a discussion of the unmet needs in pro-life work, including more education about adoption and more post-abortion healing.

David Reardon of the Elliot Institute, a pro-life organization that performs research and education on the impact of abortion on women, men, siblings and society, led s panel discussion on the changing paradigm of abortion. Panelists included Kathy Hill, Mass. regional coordinator of Silent No More, which seeks to make the public aware of the devastation abortion brings to women and men; and Dr. Helen Jackson, a practicing pro-life obstetrician-gynecologist; and a Guest who asked to remain unidentified who related her experience with coerced abortion. The panel discussed coerced abortion; the effects of abortion on family, friends, and siblings; why doctors need to know from their patients that they’ve had abortions; and other complications due to abortion.

During lunch, attendees were able to watch the new short documentary film, I Lived on Parker Avenue, about an adopted young man who sought out his birth parents and learning from them that he was moments away from being aborted when his mother changed her mind. It is an uplifting and beautiful story of pain and forgiveness and love and gratitude.

Linda Thayer, VP of education for Mass. Citizens for Life, said, ”Of all the pro-life films I have seen, this is one of  the very best, one of the most life affirming, a portrayal of self-sacrifice. I think we should encourage its viewing in as many places as possible, senior high school through adult, summer academy, chapters, parishes, etc. Most people cannot imagine a positive outcome that they haven't seen, which is why I believe in the power of story — and this story shows the power of love in adoption.”

You can see the 30-minute film in its entirety below.

After lunch, we heard the winning entry in the Dr. Mildred F. Jefferson Oratory Contest for high school you. During the morning, a panel of judges heard from high school juniors and seniors who gave 5 to 7 minute speeches on a pro-life topic. The winner of this state competition will be sent to the National Right to Life Convention in Kansas City in June to compete in the national competition. We think we have a good shot at winning this year based on the amazing speech by Gabrielle Landry, a student at Montrose School in Medfield and one of 10 children in her family. She was incredibly poised, confident, and mature as she engaged the audience and presented a clear and compelling defense of life. 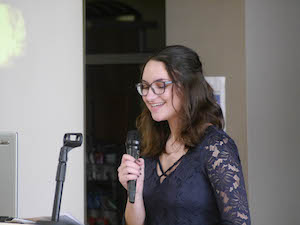 When we then had the pleasure of hearing from David Reardon again as he presented a fuller look of the results of abortion, how many women feel trapped into abortion, how they are often coerced by others, and how often they feel like they don’t actually have a choice. For instance, he said that surveys show that 40% of women entering an abortion facility are still looking for options, not realizing that once they’re in the door, the abortionist’s goal is to get them through the abortion as fast as possible. Fifty-four percent of women received no counseling and 84% complained they were inadequately counseled. Abortionists assume that just walking through the door constitutes a choice for abortion.

MCFL board member Dr. Mark Rollo provided the latest information on chemical abortion reversal, showing both research and survey results that show how doctors can stop the process of abortion with dosages of the pregnancy hormone progesterone, if the dosages are applied within the right timeframe. Many women who take the abortion pill, known as mifepristone (also known as RU-486), often have second thoughts afterward and don’t realize that there’s a chance to reverse what they have done. That’s why, Dr. Rollo said, it’s so important for ever pro-lifer to get the information out about abortion pill reversal. He said they should refer people to the web site AbortionPillReversal.com, which can then connect women to local doctors who can help.

Finally, the day ended with a panel of three speakers speaking on adoption from three different perspectives. Catherine Morrissey related her story of being a college sophomore who got pregnant, decided against abortion, and opted to give up her child for adoption. Over the years, Gib Gailius and his wife Sheila had three biological children, adopted two more and fostered a sixth child before Sheila died of cancer in 2014. Kate French is 25 years old and adopted and talked about what it was like to be adopted, knowing that her birth mom loved her enough to give her away, a foster mom loved her enough to take her in as a baby knowing she’d have to give her up soon, and her adoptive family loved her enough to go through the grueling process and cost of adoption.

By the end of the day, convention attendees had been given a bigger picture of the state of abortion and how the conversation and debate around it has shifted. The presenters showed how a new approach is needed to address the abortion problem today because the way people think about abortion has changed. For the majority of Americans, abortion has always been legal under Roe v. Wade and many can’t imagine a day when that will change. Pro-lifers can make a difference with them by understanding their perspective and offering solutions that don’t water down our respect for life, but address their concerns as they stand. Pro-lifers can do more to promote adoption, to offer counseling for women in crisis, to protect women from coercion, and to demand respect for the lives of women and their babies from abortionists and the politicians who give them cover.