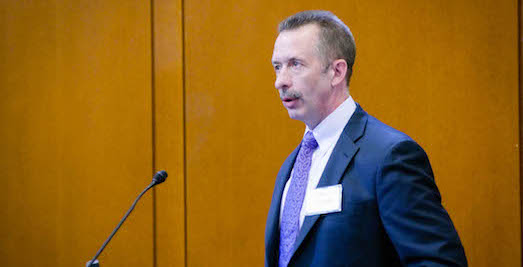 McCaffrey, who served as a neonatologist in the for Navy 26 years, promised the Convention audience a whirlwind tour. “I have a real interest in the topic of abortion and preterm birth. My goal in life is to put myself out of business. My business is preterm babies and unfortunately I don’t see myself going home any time soon.”

Another category of preterm birth is very preterm birth (VPB), babies born at less than 32 weeks. In 2015, 63,000 US births were very preterm births. These constitute 1.6% of all births and are associated with the highest risk for death and morbidity: respiratory distress, brain bleeding, blindness, hearing loss, mental retardation, and cerebral palsy. The annual cost of care for very preterm babies, just for their first year of life, is $26 billion.

McCaffrey referred to a 2006 report by the Institute of Medicine of the National Academy of Science: ‘Preterm Birth: Causes, Consequences, and Prevention.’ “Note the table listing ‘immutable’ risk factors associated with preterm birth,” he said. “’Immutable’ can mean that we don’t have a way to deal with these factors medically, or can mean that something has happened that we can never change and will impact future pregnancies forever. Buried in the report, on page 625 as an immutable risk factor, is prior first term induced abortion. How many have ever heard that abortion is a risk factor for preterm birth? How many have heard it from a professional organization such as the American Congress of Obstetricians and Gynecologists, the American Academy of Pediatrics, or the Centers for Disease Control (CDC)?” McCaffrey asked.

“Much is made of ‘mutable’ risk factors such as cigarette smoking, the use of alcohol or illegal drugs, and the lack of prenatal care as ways of reducing preterm birth. But what is the actual evidence that it really leads to problems with babies, specifically preterm birth?” he questioned. McCaffrey said that mainstream science accepts research associating smoking with preterm birth while denying the much stronger evidence associating abortion and PTB.

In 1964, the Report of the Advisory Committee to the Surgeon General noted studies showing an association between maternal smoking, lower birth weight, and a significantly greater number of premature deliveries (defined as birth weight of 2,500 grams or less) than non-smoking controls.

“As I said before, birth weight and gestational age are two very different things,” he explained. “There is good evidence for the association with smoking and smaller size babies, but it does not mean that smoking is a risk factor for premature delivery.

“In 1984, a systematic review meta-analysis of previous studies found a mixed bag of results, estimating that maternal smoking raised the risk of PTB by 27%,” McCaffrey said. “What is amazing is the meta-analysis admitted ‘publication bias may affect the results of this study but we believe its contribution is minimal.’ No one who is studying abortion and preterm birth could make that statement and get their report published.”

A Finnish study from 2012, Klemetti, et al, found increased odds for very preterm births that also exhibited a dose–response relationship: 19% for one abortion, 69% for two abortions, and 178% for three abortions. The study recommended that “Health education contain information of the potential health hazards of repeat induced abortions, including very preterm birth and low birth weight in subsequent pregnancies.”

The Finnish study also noted, “Observational studies like ours, however large and well-controlled, will not prove causality.” McCaffrey was incredulous, asking, “Did we ever prove causality for smoking?” But with abortion we have to prove causality, not just association.”

“You have to realize all this data is out there,” he repeated citing yet another study, Lemmers et al. from 2016 that said “The meta-analysis shows that women with a history of a dilatation and curettage (D&C) procedure for either termination of pregnancy or completion of miscarriage is associated with an increased risk of subsequent preterm birth. The increased risk in association with multiple D&Cs indicates a causal relationship and warrants caution in the use of surgical uterine evacuation.”

Oliver-Williams et al: ‘Changes in Association between Previous Therapeutic Abortion and Preterm Birth in Scotland, 1980-2008,’ saw a decreased risk for preterm birth as practice changed in favor of medical abortions. “What is landmark about these studies are the comments,” McCaffrey said. “People are either not reading them, or it is so ingrained in how they think about abortion that there’s nothing unusual about them. Quoting from the study McCaffrey read, “We speculate that changes in the methods used to achieve termination of pregnancy are the most plausible explanation for the loss of the association between previous abortion and the subsequent risk of preterm birth…The above interpretation assumes a causal association between surgical abortion without cervical pre-treatment and preterm birth, and there are a number of aspects of the current analysis that are supportive of a causal relation.”

McCaffrey said it is still unknown exactly how abortion causes preterm birth. Potential causes include: cervical trauma and injury, induction of or predisposition to inflammation, maternal stress, and other unknown factors. Referring to medical abortion McCaffrey said, “The sudden loss of progesterone function upon mifepristone administration differs from the more gradual withdrawal of progesterone that occurs during a normal term birth. It’s not natural and a lot of unusual things can happen. We just don’t have the science.”

In 1965, Bradford Hill noted nine conditions that help strengthen causal inference for an observed association: strength of the association, consistency, specificity, temporality, dose response, plausibility, coherence, experiment, and analogy. These were used to establish the link between cigarette smoking and lung cancer. “Hill said his viewpoints aren’t indisputable evidence, but what they can do is to help us make up our minds on the fundamental question – is there any other way of explaining the facts before us? All scientific work is incomplete, is likely to be upset or modified by advancing knowledge. That does not confer a freedom to ignore the knowledge we already have, or to postpone an action that it appears to demand at a given time,” McCaffrey said.

“Is anybody listening?” McCaffrey wondered. “It takes courage for researchers to speak out. Dr. Phil Steer, editor of the prestigious British Journal of OB/GYNs wrote, ‘We have known for a long time that repeated terminations predispose to early delivery in a subsequent pregnancy.’ Really? Who’s been told that? The American Congress of OB/GYNs (ACOG) has never said that. This is buried in his editorial. This is astounding.”

“ACOG has ignored the Hill criteria claiming there is no risk from abortion to future pregnancies. ACOG protects the interests of OB/GYNs, not the interests of the patients,” McCaffrey said. “Until ACOG is willing to say something, even if OB/GYNs recognize the truth, they are not going to say anything. This is problematic.”

McCaffrey is not immune from mainstream prejudice. In 2014, he submitted an article, “The Abortion-Preterm Birth Association,” to the American Academy of Pediatrics asking that they incorporate counseling for adolescents on the risk of preterm birth after an abortion in their health guidelines pathway. “The comments on my manuscript didn’t review the science of the article,” he said. “One comment read ‘The recommendation to let the teen know about a possible association of abortion and a future preterm birth has a strong flavor of a ‘right to life’ message that is not relevant to or supportive of a teen’s decision making.’ This is astounding. The mindset of academia is not academic. It’s protecting a political policy position.”

“We need to create informed consent and inform the public of the impact of abortion on preterm birth,” Mccaffrey said. “The CDC doesn’t mention it. The March of Dimes doesn’t say anything.”