Discovering What It Means to Be Pro-Life 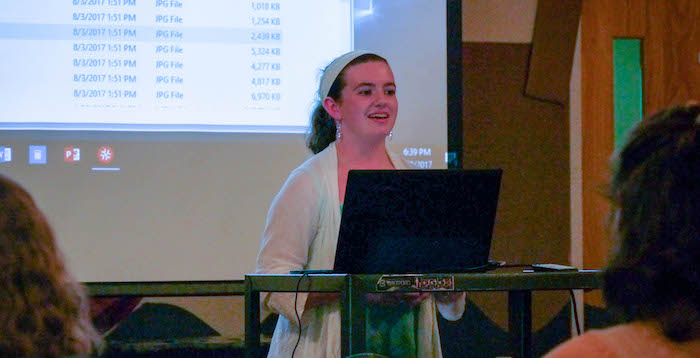 I thought I should preface this by telling you that I am extremely nervous - for two reasons. The first is that I am not a fan of public speaking. It doesn’t matter if there are ten of you or ten thousand of you, I will inevitably turn red, have shaky hands, and stumble over my words.

But there is another reason why I’m nervous. I’m nervous because I am not the same person I once was. If you had met me five years ago, three years ago, possibly even a year ago, you would be meeting an entirely different person from who I am today.

Today, I am pro-life. I believe in protecting life from conception until natural death. I know that life is precious. But this wasn’t always the case. There was a time, not so long ago, when I was adamantly and arrogantly pro-choice. That arrogance came from a place of ignorance.

Yes, I had heard the dictionary definition and that was something I agreed with. But no, I didn’t know exactly what I was signing up for by adopting this ideology.

And I found out slowly.

As I learned about the mainstream feminist movement, there were things I agreed with, things I disagreed with, and things I didn’t really understand.  I did understand, however, the disgust towards people that didn’t agree with all of the “feminist principles.” Those that disagreed on any points were hateful and cruel. They were misogynists. They were trying to hold women back.

And so I kept my mouth shut.

Abortion was one of those concepts I didn’t really understand. I didn’t know much about it, and at twelve or thirteen it wasn’t really the first thing on my mind. But I believed the company lines. From “It’s a woman’s right to choose” to “It’s just a clump of cells.” I believed the lies I heard without question. Until last June.

Last June, I went to Discipleship Week, a Catholic retreat through the Archdiocese of Boston.  We weren’t really talking about pro-life issues, but during one of the many talks, a Bible verse was projected on the screen. “For you created my inmost being; you knit me together in my mother's womb.” (Psalm 139:13)

There are dozens of secular, scientific reasons to be pro-life, but this is the thing that struck me: “You knit me together in my mother’s womb.” This isn’t a clump of cells. This isn’t a blob of tissue. This is a real, human person being formed. That was my turning point.

Gradually, I began to learn what it really meant to be pro-life. I had so many questions, but this time I really looked for the answers. I stopped taking everything I heard at face value.

My point isn’t to deter people from the feminist movement. I still identify as a feminist, but a pro-life feminist. I think it's important for people to know that you can be both. Because how can a movement meant to empower women support a practice that destroys them? How is it empowering to tell someone that they can’t reach their fullest potential if they become a mother? And what happens to those women after they’ve had their abortion? Do they feel empowered? Do they feel strong? Or do they feel alone?

The pro-life movement is often misconstrued as something hateful. Something cruel. It’s our job to break those stereotypes. Not to be judgmental, but understanding. Not to be callous, but compassionate. Not to be hateful, but to be full of love.

We are pro-life, not pro-death.

And so we cannot be pro-hate, but pro-love.

Sarah is 16 and lives in Holbrook