Will you be the 2018 Oratory Contest Winner? 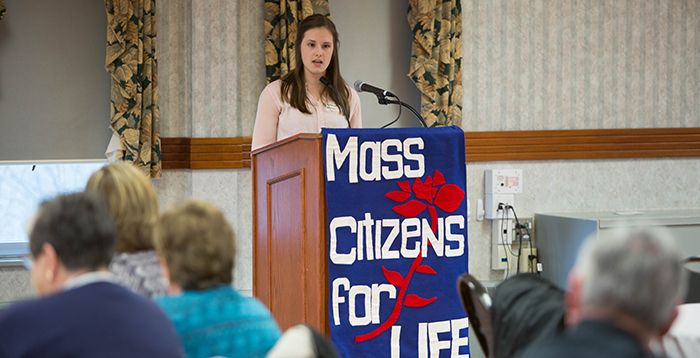 Every two years, Massachusetts Citizens for Life holds its Dr. Mildred Fay Jefferson Oratory Contest for high school juniors and seniors, which encourages young people to articulate their pro-life beliefs through convincing oral presentations on a variety of topics. One winner will then attend the national competition in June, but everyone who participates will have their oratory skills as a pro-life leader sharpened.

The contest is named for Dr. Jefferson, the pioneering pro-life leader who broke barriers as an African-American female doctor who graduated from Harvard Medical School, helped found Massachusetts Citizens for Life, and was known nationwide as a pro-life leader. President Ronald Reagan once cited her as instrumental for him in becoming pro-life. There’s no better role model for a young pro-lifer to follow than Dr. Jefferson.

This year, the competition will be held at the MCFL Annual Convention, which this year is on Saturday, March 24 at Cardinal Spellman High School in Brockton. Each participant will give a 5-7 minute, original pro-life speech on abortion, infanticide, euthanasia/doctor-assisted suicide, or stem cell research.

The winner of the state competition will then have the opportunity to travel with a parent or guardian (with travel expenses covered by MCFL) to represent Massachusetts at the national competition sponsored by National Right to Life. In 2018 the national competition will be held at the National Right to Life Convention, June 28-30 in Kansas City. You’ll also receive an invitation to give your speech at the 2019 Assembly for Life next January.

You can get an idea of what the experience is like from this interview with our 2016 Oratory Contest Winner, Isabelle Germino.

We encourage all interested juniors to participate this year because this is a biennial contest. The next competition will be in 2020, after your high school senior year. If you have attended an Massachusetts Citizens for Life Summer Academy, you should definitely consider taking part. Find out more, including information about registering for the contest and contest rules by CLICKING HERE.