Whatever It Takes, We Need to Say YES

[ Do you do whatever it takes?  Do you know what that looks like? Mike reflects on the love in action that is the cornerstone of being pro-life. ]

I just walked by a dresser in the other room.  It’s old and beat up. I have had it since I was a kid.  It probably needs to go.  But I just can’t get rid of it.  It connects my past to the present  I remember that day when I was 5 or 6 when it was bought.

You see my parents are pro life  When I was young my parents took a woman into our home who was experiencing a crisis pregnancy.  It was the first Years after ROE.   This woman needed a place to stay and the love of a family.  I remember sneaking down to hear the discussions between my mom and dad    As I listened, they agreed to do what ever it took to save the baby.  They decided to make her comfortable and bought a beautiful dresser for the room.

The woman stayed in the room during her pregnancy.  She and I cease friends as she would often babysit she would let me feel the baby kick.  She treated me like a little brother.  She eventually gave birth to the child and he was adopted.   She moved out and the dresser became mine.  Even though there were other women who moved in with us,  I have always kept the dresser.

I was and still am impressed by my parents.  They did what ever it took to save a life.  Bringing a woman into our home, feeding her and giving her a place to live. Growing up with an experience like that, how could anyone not be pro-life? 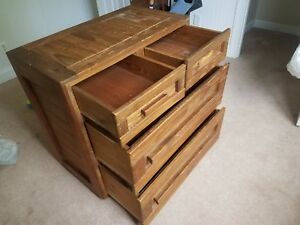 My parents did whatever it took.  I look to the pro-life movement today and the stories of that are few and far between.  With 75 percent of the abortions being poverty related, our pro-life movement rarely takes a young woman into their household and surrounds them with family in the months leading up to their birth..  Instead as pro-lifers we may rely on the welfare system rather than taking them into our homes.   I don’t know the reason. But maybe we should consider that.  Maybe we should, as a movement, think about doing what ever it takes to save a life.  Giving of our time and treasures to help someone who doesn’t quite know what to do.

Instead of being judgmental and saying, “she should have kept her legs closed,” be more accepting and say, “what can I do to help?”   Maybe we should try to do what Christ taught us and give our time, money, and treasures helping someone in need.  Laying down a little bit of our life for our friends is what we were meant to do.  Lay down a little bit of our life to help save another.

Seibel is a practicing attorney in New Mexico, who by his own profession "will never be one of those lawyers who work in the Supreme Court or have big Manhattan law offices". He has spent his career advocating for the least in the society. He is currently working tirelessly to protect women, and their unborn children by prosecuting Dr. Curtis Boyd, and his outpatient abortion facility, in the death of Keisha Atkins, and other women.

Do whatever it takes