In a great leap for progress towards real respect for human rights, Louisiana passed an amendment to their state constitution to protect every human life, should Roe v. Wade be overturned.

The amendment, as posed to voters on the ballot, ran thus: "Do you support an amendment declaring that, to protect human life, a right to abortion and the funding of abortion shall not be found in the Louisiana Constitution?" It passed with an enthusiastic 68% approval, and follows a list of other states (Tennessee, Alabama, West Virginia)that have let their citizens proclaim their pro-life principles loud and clear at the ballot box, a right Roe v. Wade -- and a pro-abortion, activist Supreme Court -- denied voters in 1973.

Our media and even our own local and personal dialogues often focus on the national drama. While by no means unimportant, the presidential election is only a fraction of the function of United States government. Especially should Roe v. Wade be overturned, the reality and power of local elections, state amendments, and continued compassionate outreach both culturally and politically will be the key to making abortion illegal and unthinkable.

In Massachusetts, where American citizens have blazed the trail in the past in the fight for equal protection for any and every human life, we commit to seeing our constitution similarly reflect the reality that abortion takes a human life, and we have an obligation to promote laws that reject it, and protect them.

Perhaps the strongest statement -- and the clearest -- made by either candidate in the vice presidential debate on October 7th, was Mike Pence's. "I couldn’t be more proud to serve as vice president to a president who stands without apology for the sanctity of human life," he said, "I’m pro-life. I don’t apologize for it, and this is another one of those cases where there’s such a dramatic contrast. Joe Biden and Kamala Harris support taxpayer funding of abortion all the way up to the moment of birth. Late term abortion. They want to increase funding to Planned Parenthood of America."

But more important than any statement are actions.

We encourage every one of our members and fellow citizens first to review the impact of legalized abortion in the United States. Every 4th child conceived in our nation dies from abortion. Second, we encourage you look at Kamala Harris's treatment of investigative journalist, David Deleiden in California (during her tenure as state attorney general) and compare that to Vice President, Mike Pence's service in Indiana.

Harris flagrantly ignored basic first amendment rights, enforced searches and confiscations of private property without warrant, and has dogged pro-life citizens with unconstitutional restrictions on their free speech. Harris brags that she ran the second large department in the United States -- "second only to the federal department of justice." Large, yes -- but just and uncorrupt, no. Email correspondence unearthed by Deleiden's attorneys proved Harris met  Planned Parenthood leadership just a week before the unwarranted raid on his home. Text from a state Department of Justice document by attorneys also included a demand: “Planned Parenthood would like the computers used to produce the videos seized.”

"Are we gonna go back to the days of back-alley abortions? Women died before we had Roe v. Wade in place," said Harris recently; yet she has no words for women like Keisha Atkins, who died because of a "safe, legal" abortion in New Mexico, or thousands of others. Moreover, she has no words for the pre-born women who die by the thousands each day under Roe v. Wade. Her only words for citizens who expose a corporation that preys on women, sells live baby parts, and still demand federal funding, boil down to sit down, shut up, or go to jail.

In contrast, on issues of human life, Trump and Pence have followed through on commitments to support alternatives and cut off federal support for aborting American children.

President Trump is the first sitting president in United States history to attend and address the annual March for Life in person.

In one of his first acts as president, he reinstated and expanded the Mexico City Policy, which prohibits taxpayer funding to groups that promote or provide abortions overseas. The change defunded Planned Parenthood’s international arm of about $100 million in U.S. tax dollars.

Pro-life democrats have decried their party's insupportable adhesion to abortion. So has the Trump/Pence administration. During the State of the Union address Trump slammed the governors of New York and Virginia for promoting abortion up to birth and infanticide. He also called for Congress to pass a ban on late-term abortions on babies who are capable of feeling pain.

Trump and his administration have made a number of changes to protect those who morally object to abortions, expanding conscience protections for medical workers who believe it is wrong to kill an unborn baby and increasing religious exemptions for Obamacare.

His administration also intervened to stop the United Nations from supporting abortion in a resolution about sexual violence. In 2018, under his leadership, the State Department removed references to the so-called “right” to abort an unborn baby from a global human rights report as well.

During his presidency, the administration also finalized a new Title X rule that requires health care entities to completely separate abortion from their taxpayer-funded services. Planned Parenthood, which already has said it will not comply, could lose about $60 million annually through the policy change. The abortion group is suing to block the cuts.

One key issue in the development of our nation's government in the next few years will undoubtably be judicial reform. To that point, who is nominated and confirmed to our Supreme Court will be critical if States' rights to decide to protect our most vulnerable citizens are to be restored. Roe v Wade should never have forced abortion on a nation with a nation with a pro-life, anti-abortion majority.  "Of course I want Roe v Wade overturned," remarked Pence, "though I'm not being nominated to the Supreme Court."

No, he isn't. But with a Republican candidate in his mid-seventies, and a Democratic candidate who is nearly eighty, we're looking very closely at the vice presidential picks. We're looking at what they will do about the 3,500 babies legally killed per day. We're looking -- and on November 3rd, we're voting.

Read more on the current administration's record: Which Mainstream Candidate is Pro-Life?

NEWSBREAK: Joe Biden Says "I Am the Democratic Party," and That Means Abortion

While over 20 million Democrats would strongly disagree, Joe Biden declared last night that to be a Democrat equals being pro-abortion.

The National Right to Life has sent out concise press release demonstrating the abortion extremism of the Biden/Harris campaign.

Where do the candidates stand on the right-to-life positions?

On the eve of its 49th annual convention, the National Right to Life Committee, the federation of state right-to-life affiliates and local chapters, of which Massachusetts Citizens for Life is a state affiliate, endorsed pro-life President Donald Trump for his 2020 re-election.

On August 29th the MCFL Federal Political Action Committee, which is a separate entity from Massachusetts Citizens for Life, but dedicated to endorsing pro-life candidates, endorsed President Donald J. Trump on his reelection bid for President.

Please note that Massachusetts Citizens for Life does not, and has never, endorsed candidates for any office due to certain regulations. It is our role to share information on the candidates running for office and where they stand on specific issues related to life.

This file does not include third party candidates. 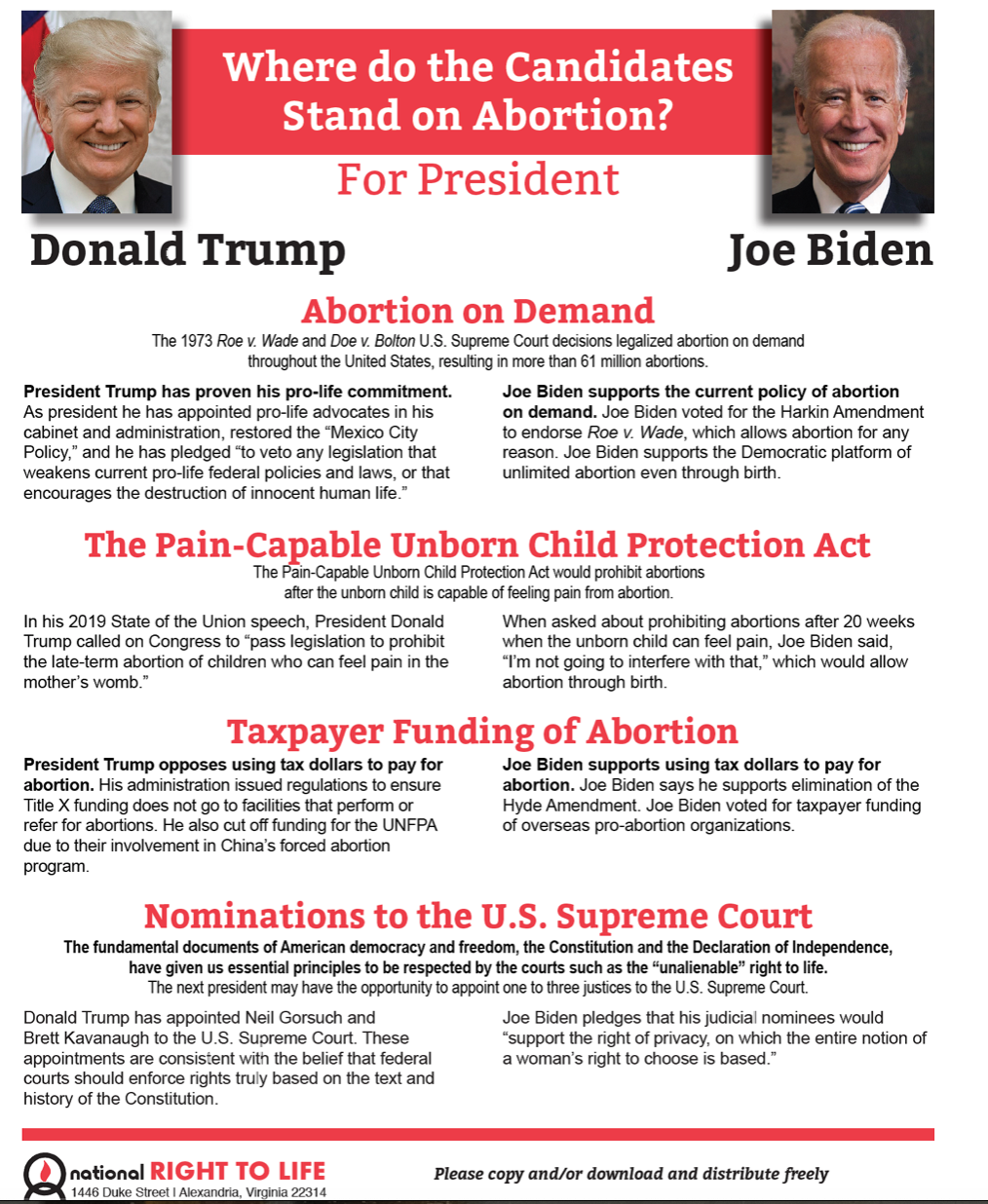 Posted on In The News by C.J. Williams · August 17, 2020 2:14 PM · 1 reaction
Democratic Presidential nominee, Joseph Biden, has selected his running mate -- and at the same time solidified his support of extreme abortion policy. His vice presidential pick, Kamala Harris, former attorney general of California, was announced August 11th.
Says MCFL President, Myrna Maloney Flynn, "Harris' addition to the ticket simply confirms what the Democratic party has recently attempted to deny: its modern platform promotes abortion on demand at any stage of pregnancy. Polls continue to show that both our state and our nation reject abortion extremism."
"Harris has continued to advocate for policies that promote quick-fix abortion promotion over authentic respect and support for our women," says C.J. Williams, MCFL director of community engagement.  "Harris has put abortion even before her obligation as an attorney general to uphold first amendment rights to the point of raiding a citizen journalist's home who exposed Planned Parenthood's illegal trafficking of human body parts."
This is a blow to pro-life democrats, who historically have stood up for the vulnerable. A section of the party, headed by Kristen Day, has set up a petition to change the party platform. In the meantime, Biden has made it clear he doesn't want even the moderate pro-choice vote, let alone the votes of pro-lifers across the nation. 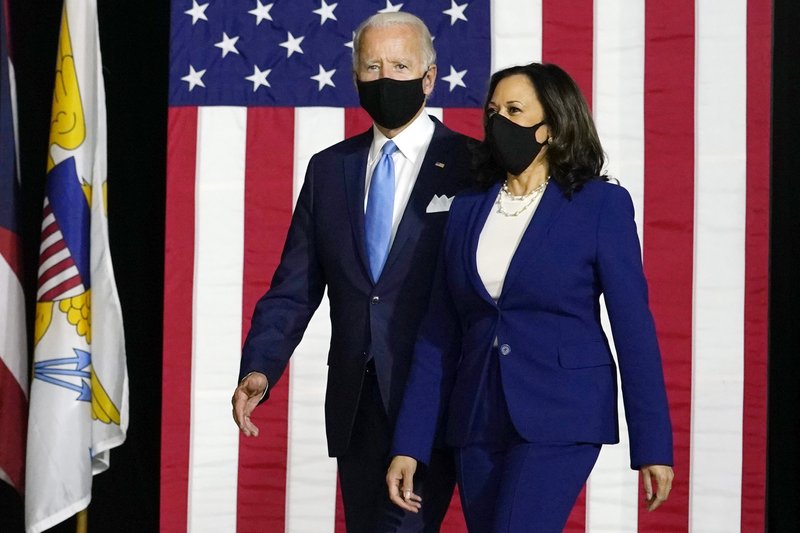