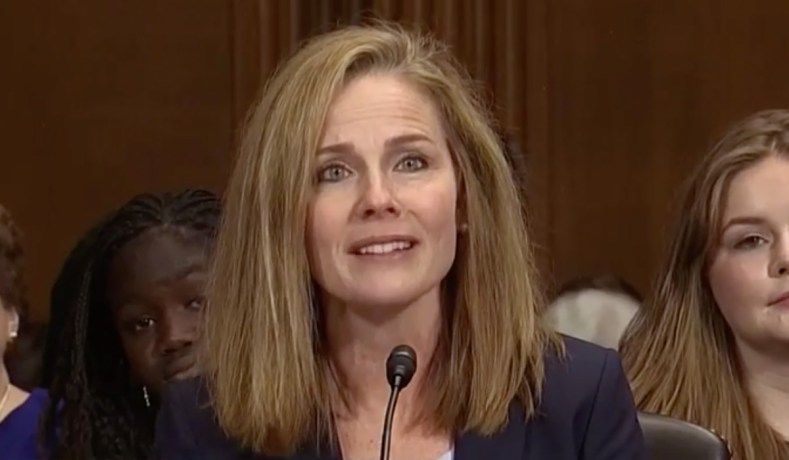 She's the perfect fit for our Supreme Court, and for our nation: Feminist, brilliant, both a loving mother and a keen and balanced court justice. She's young. At 48, she will be the youngest justice in our highest court. Her progressive principles show up in her living, as you can see by her family and professional life. Balancing parenting responsibilities with her husband, she is a contemporary example of equality for women based on shared responsibility, rather than the violence of abortion (as Erika Bachiochi notes).

So why is there this radical rift in public opinion about her nomination?

The answer may lie in her consistency. Because Barrett believes in authentic human rights and equality, she opposes abortion.

Amy Coney Barrett is pro-life.  Protecting women and the unborn from violence is the one and only thing that keeps her from sailing into our highest court -- and that opposition, much more than any of her qualifications or vulnerabilities, is something we should be focusing on.

But the opinion that a child's life is the price for a woman's freedom is one that needs to be stated plainly and examined all across our political spectrum. That opinion, and its proponents, should be under the microscope: not Barrett.

Read on for some notes on Barrett's judicial voting record, judicial philosophy, and background.

Barrett has a brief but consistent record in support of life. In 2016, Barrett voted in favor of rehearing a 2016 case regarding an Indiana law that required aborted babies to be buried or cremated after some judges determined the law to be unconstitutional. The case was later heard by the Supreme Court, which upheld the law. Ginsburg was the sole justice to write a dissent to that ruling.

Barrett also voted to rehear a case regarding a law that would have banned abortions because of the baby’s sex, race, or disability, a law of which she was in favor. In 2017, in the case of Box v. Planned Parenthood of Indiana and Kentucky, Inc., Barrett joined dissenters in support of the Indiana law requiring doctors to notify the parents of minors seeking abortions.

In terms of her understanding of the position, Barrett states that she is accepting the nomination not to promote her personal opinions nor for others in her privileged position. “I would assume this role to serve you," she wrote this week,  "I would discharge the judicial oath, which requires me to administer justice without respect to persons, do equal right to the poor and rich, and faithfully and impartially discharge my duties under the United States Constitution."

Kelsey Hazzard, a lawyer and tireless advocate for the unborn from Florida, remarks that "[Barrett'] is a mother of seven, including a child with Down Syndrome. Those two aspects of her life are not in conflict. Judge Barrett's biography proves that, shockingly, work-life balance is achievable without dismembering any babies."

More detail on her career and record can be found at the National Review, which features an article discussing her judicial approach and background. Read it here.