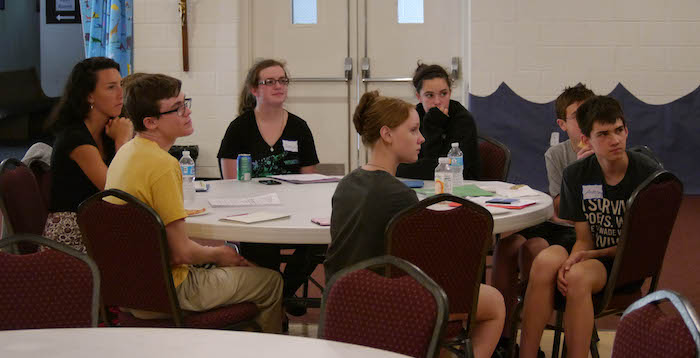 Massachusetts Citizens for Life held its seventh Summer Academy this year at Saint Mary of the Sacred Heart Parish in Hanover. This six-week program is designed for high school students, but the grades of attendees ranged from finishing middle school to beginning college. The goal is to teach students to be pro-life ambassadors, by equipping them with information for better discussion and education in their communities and to provide leadership in those communities. One way of doing this is to provide students with objective information that can help people understand the value of life. Another way is to learn personal stories of people who have suffered because of abortion or have worked with parents considering abortion.

MCFL President Anne Fox said the Summer Academy is modeled after a similar program in Rhode Island. Since its inception seven years ago, it has been held all over the state, though Fox said she would like to have it in even more locations. Speakers chosen are always from within Massachusetts, bringing a sense of locality to the sessions.

Several students said they had experienced situations in which their teachers or peers applauded pro-choice philosophy or lambasted their pro-life views. Fox noted that some pro-life speakers feel they have failed if they do not fully convince every person in the room. Her view is that “every time you put it out there, you have won.”

Olivia Colombo, 16, an incoming high school senior attending the Summer Academy, already has a track record as a pro-life speaker. “I truly hope to gain more facts and opportunities to speak out,” she said via email. “We are the pro-life generation, and nothing will stop me from speaking out and speaking up. It’s a movement of love, and we need to share that love.”

Two speakers presented at the July 19 session. First, Cori Connor-Morse shared her personal experience of abortion. Then, Joan Bailey talked about Friends of the Unborn.

Connor-Morse gave out copies of her testimony, entitled “Scar Tissue,” after reading it aloud. “I call this testimony ‘Scar Tissue’,” she said, “because people who have suffered from abortion may look fine on the outside, but the wounds on the inside can’t heal properly: They leave scars—scars that get worse, not better, over time because the wounds reopen quite often. They reopen as friends, family, and neighbors have children, put them on the school bus, celebrate birthdays, attend their graduations and weddings, and have grandchildren. Abortion doesn’t just take one life. It takes generations of lives. It changes history by its very nature.” Connor-Morse returned to this theme of changing history at the end of her talk, professing that the whole world changes when a baby is born, and the whole world changes when a baby is aborted.

Connor-Morse had an abortion in 1983, when she was twenty years old. At the time, she had left her childhood faith and considered herself an atheist. She was married but wanted to finish college and become an accountant and believed a child would prevent her from doing so. “I would have a child according to my own schedule—not anyone else’s—and certainly not God’s.”

As the procedure began, she felt a dreadful knowledge that she had made the wrong decision. She later learned that the reason she felt this way was because God has written His natural law on our hearts and the Holy Spirit offers the gift of understanding. “Had I been receptive to receiving this gift earlier, my choices might have been vastly different...Because I had no faith, I rejected a miracle,” she confessed.

In the years that followed, ConnorMorse struggled with failed marriages, depression, panic attacks, overeating, and suicide attempts. She resented her work because her career prospects had driven her to abort her child. She felt unworthy of being a mother, so she never had more children. She sought counseling, but her therapists only tried to convince her that there was nothing wrong with having an abortion. This, of course, did nothing to help.

In 2008, Connor-Morse heard a radio interview with a woman who described her tragic experience with a late-term abortion. Connor-Morse wanted to talk to a priest, an impulse she now attributes to God because “God makes the first move in matters of faith.” She received the sacrament of Reconciliation for the first time in decades and went through Project Rachel as part of her penance.

Connor-Morse said she considers herself one of the luckier post-abortive women because she eventually felt forgiveness by returning to the Catholic faith. She said forgiveness—even forgiveness of oneself—is not a feeling but a decision, an act of the will. “If Jesus could forgive His torturers, who are we to not forgive?” she opined.

In addition to speaking from her personal experience, Connor-Morse also shared statistics about abortion, and brought models of unborn babies to show the size of a fetus at different gestational ages. She believes she would have chosen life for her child if she had known more about fetal development and advised, “the science is all you need to convince others of the truth.”

What options are there for a woman who chooses life instead of abortion? Joan Bailey, executive director for Friends of the Unborn, knows the answers firsthand. Friends of the Unborn is a faith-based nonprofit that provides housing, counseling, education, and other services to homeless women who are pregnant or new mothers.

Marilyn Bernie founded Friends in 1984, when she and her then teenage daughters first opened their home to homeless pregnant girls. A pregnancy is only considered an emergency after 22 weeks, but Friends takes women in at any point during pregnancy. Women can stay until their child’s first birthday, since housing older children would require different safety standards. Veterans of their residency programs are matched with new mothers to act as mentors.

Bailey said she dislikes the term “crisis pregnancy” because pregnancy should not be considered a crisis. Bailey herself experienced an unplanned pregnancy at age 21 while she was in college. When her daughter was pregnant with a baby who had only one kidney, the doctors treated the unborn child as if it were already a person distinct from its mother. Bailey said, “Being prolife is a lifestyle choice,” a day-to-day commitment that people live out every time they show compassion to a human being.

During the Q & A session following the talk, one student asked how to convince people that the United States Constitution does not cover abortion. Bailey recommended being firm but gentle, and sometimes turning to prayer rather than argument. Later, she noted that asking questions in return is an effective, non-confrontational way to help people reexamine their views.

Jacqueline Tetrault is a recent graduate of Gordon College. She writes from Beverly, Massachusetts.