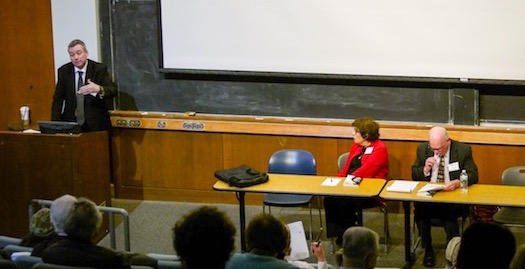 We are continuing our review of the presentations given at 2017 Convention in April. You may also find these presentations in our quarterly member publication, MCFL News. In this presentation, Craig Collins stakes out a somewhat controversial proposition to begin a conversation.

"Roe v. Wade is not only wrong. It is obsolete. It was a response to problems of a distant era and its intellectual applications are no longer applicable," said Craig Collins, Esq., author of Yesterday's Law: Abortion in Modern America. "Roe outlived its historical justification and as a result will disappear into history much sooner than people expect."

Collins analyzes the historical context of Roe v. Wade in light of the vastly different political and social and conditions of 1973 and today. "Pro-choice arguments are predicated on attitudes towards single motherhood that no longer exist," he said. "In 1973, adults had grown up in a time where the stigma against unwed motherhood was widespread." The idea that an unwed, pregnant woman was a “fallen woman,” was a familiar cultural assumption particularly for the justices of the Supreme Court who were to decide the case.

"Unwed motherhood was considered so shameful that women were sent away to hide during pregnancy," Collins said. "Even through the 1950s and 1960s, people could be arrested for premarital cohabitation. A child born out of wedlock was subject to discrimination, stigmatized as an 'illegitimate child.' Legal abortion was seen as necessary to save women from back alley abortions and a lifetime of ostracism and disgrace. It was seen as a solution to the real consequences suffered by mothers.

"The ethical case for abortion, questionable from the start, has been completely eroded by the acceptance of single motherhood today. In 2008, 41% of all births were unwed births. There has been massive public acceptance of single motherhood. The cultural assumptions that may have been valid in 1973 when the pro-choice lobby was pressing its case, are no longer applicable."

Collins likened pro-life/pro-choice arguments to WWI trench warfare. "Each side of the abortion debate argues from its own version of morality. I believe that when these arguments are recast to appeal to social changes, these changes can be favorable to pro-life arguments."

"The average American is not going to fight passionately for the right to have multiple abortions," Collins said. "The enthusiasm gap will favor the pro-life position. We can achieve the goal of overturning Roe before its 50th anniversary in 2023. I firmly believe it’s an achievable goal with the confirmation of one or two more Supreme Court justices.

"We need to build coalitions with people who may not be with us on any other issue. We need to avoid a 'culture war' mentality where we only talk to people who already agree with us. What are the 'facts beyond change' in this case?

"The permissive attitude toward sexuality is not going to change anytime soon. We can use that fact to our advantage in the abortion debate. Polling data shows Americans becoming more liberal on every social issue except one: abortion. The younger generation is even more pro-life than the older generation. That is a trend we must capitalize on. And even people who identify as pro-choice are against second trimester abortions. There's room for discussion. However, we accomplish nothing if we ensnarl the abortion debate into a culture war against sexual permissiveness.