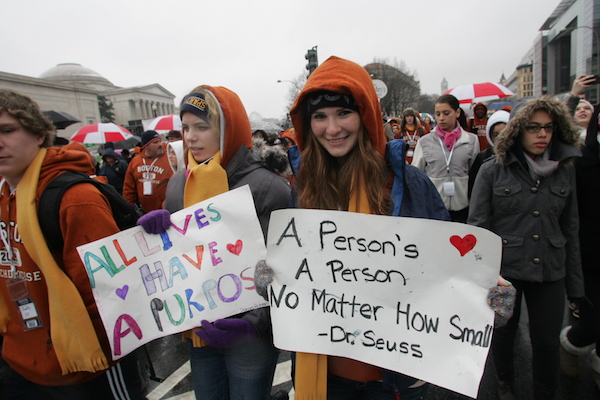 If you’re a young woman, you know that the pro-death abortion lobby wants you to believe that the only way women can be free is to live on the level of an animal, satisfying each passing desire and preying on the weak. We’ve all heard it.

You know better. You know that you’re growing into a strong, intelligent, powerful, and compassionate woman and you know that in order for women to live at their full potential and maintain their equality and dignity, we need to say “NO!” to the lies of the culture of death.

Being compassionate doesn’t make us weak, it makes us strong. Standing up for the lives of the unborn and vulnerable makes us generous, not stupid.

The abortion lobby want you to think that the pro-life cause is controlled by angry, old men. You know that women dominate the pro-life movement–motivated by a sense of justice and compassion for the voiceless.

What can you do to further the movement? Speak out!

Tell your friends and family where you stand on the issue of Life and why. Let them know that being a girl or young woman means caring about others enough to protect their lives.  Openly reject the idea that abortion is a “woman’s issue,” because it’s a “human person issue.” Don’t let the abortion lobby speak for you. Argue the issue and know your facts.

Next, you should see about starting a pro-life club at your church or school, or joining an existing chapter near your town. Finally, you need to join Massachusetts Citizens for Life as a Youth Member–as a part of the oldest, largest, and most dynamic pro-life group in the state you can make a significant difference.

Together, we can take back “women’s issues” for the cause of life.  Start today!