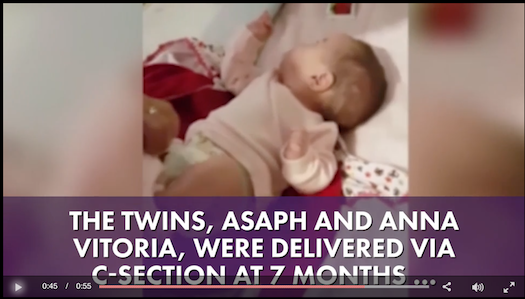 The babies were delivered by C-section at 7 months after their mother was on life support machines for 123 days. This was the longest any pregnant woman had been without higher neurological functions and still gave birth.

The New York Post has a beautiful short video.

Notice the natural inclination of the doctors and journalists to speak of the babies as alive and as persons: “But the fetuses’ hearts kept beating, and if they weren’t going to give up, neither were the doctors.” Clumps of cells don’t persevere, people do. This is how we talk of people. The video adds: “Over 20 specialists worked to keep the babies alive…”

We work for the day when our society, including all medical professionals, see all babies in the same way: little miracles deserving of every chance to be born; fully human from the day of their creation with every right endowed by God.