The Oscars ceremony aired this past Sunday night, fittingly closing the film awards season. Movies are meant to reflect cultural values. What is supported in film is meant to be lauded in real life, be it qualities, beliefs, or ideals. Award shows amplify this by denoting particular movies of interest. We, the public audience, then draw our attention to them and what they represent. These award shows also tie in presenters, acts, and performances in between to give focus to certain themes.

What kind of values did the Oscars represent in relation to the pro-life movement?

At first glance, there really was not much to take away from this year’s ceremonies in terms of a political message. There weren’t many political speeches during the Oscars, surprisingly enough. Those that did speak of any particular theme did so vaguely, referencing unity and the need for equality in our society. After a long week filled with division in our political system, in a way, it only makes sense that the Academy would have taken such a nonpartisan approach. However, it is clear that they made a life-affirming statement, and quite possibly without intending it.

To present the Oscar for the category of Live-Action Short Film, actor Shia LaBeouf was accompanied by Zack Gottsagen. The latter is an up-coming actor who starred with LaBeouf in last year’s film The Peanut Butter Falcon. Last night gave Gottsagen an incredible opportunity, as he became the first person with Down syndrome to present an Oscar. With LaBeouf, Zack Gottsagen gave the award, and even delivered the famous line, “And the Oscar goes to…”. 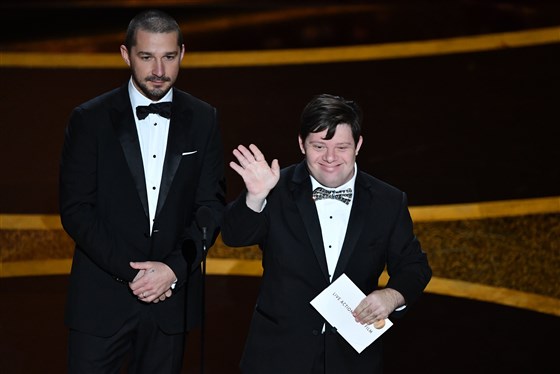 It was a touching moment. In a culture riddled with stigma against those with Down syndrome, the Academy’s choice to represent the community through Gottsagen was an impressive one.

One of the many themes the Oscars seems to represent is the idea that anyone, no matter their circumstances, can achieve greatness. People tend to devalue those with Down syndrome, either out of complete ignorance or patronization. The prevailing belief is that, due to some of the struggles that comes from the syndrome, that people who have it will never be able to succeed in most aspects of life. Gottsagen is living proof that this assumption is wrong. His life is worth living in itself, and he was able to make something beautiful out of it.

What does that mean for us as pro-lifers? For one, it shows that the attitudes surrounding Down syndrome are certainly changing, and that parts of our culture are attempting to ensure that it happens. It also reminds us that we must lobby to ensure that babies diagnosed with Down syndrome in the womb are not aborted. In the United States, 67% of the pre-born diagnosed with Down syndrome are aborted, simply as a result of the diagnosis. This terminal example of discrimination is something that we as a culture must defeat.

There are immediate opportunities for us to help counter the destructive attitudes our culture still has regarding those with Down syndrome. Our state and nation face two bills that must be opposed at all costs: the ROE Act (S.1209/H. 3320) in Massachusetts and the federal bill H.J. Resolution 79, which would remove the deadline for ratifying the Equal Rights Amendment (ERA). The ROE Act and the ERA would not only ensure that aborting babies with Down syndrome remains legal, but possible at any point in pregnancy and funded by taxpayers. These laws would only serve to deepen the prejudices against those with Down syndrome, restricting their ability to rise and drive the course of their life like Zack Gottsagen has.

This is where your action matters. Call your state and federal representatives and senators to oppose these dangerous bills. Your voice, counted with many others, are the small shifts that our culture needs to turn the tide. We can create a culture that is more accepting of life in all its circumstances by putting just a few minutes aside for this pertinent cause. While our actions may not be as widely televised as the Oscars, they are still just as important in creating a culture that is more accepting of all people in all stages of life.

You can instantly contact the members of the Joint Committee on the Judiciary by accessing this link and emailing and calling Chair Claire Cronin.

Look up your legislator here and request that they personally meet with Chair Claire Cronin asking her, and the committee, to oppose the "ROE" Act.