Culture Column: The Expression of a Hopeful People: MLK & Nonviolence

The Expression of a Hopeful People: MLK and Nonviolence 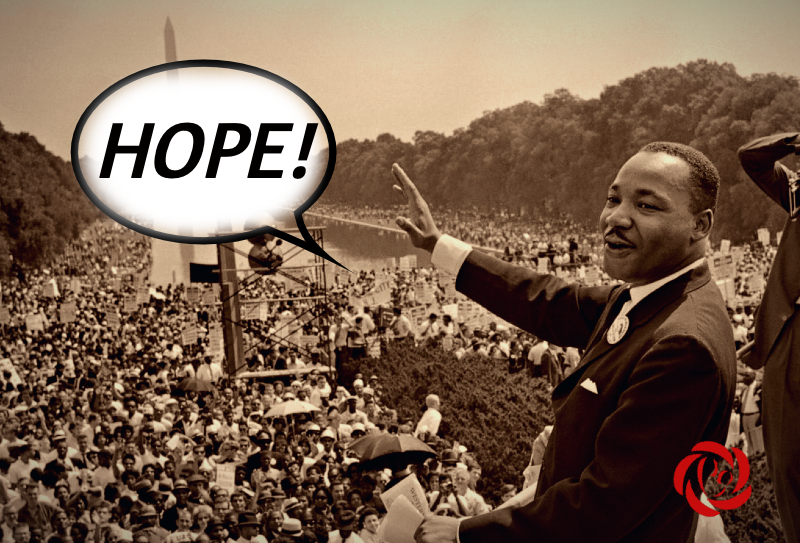 The second - and perhaps most famous - element of Dr. Martin Luther King, Jr.’s activism strategy is nonviolence. When learning about Dr. King in schools, we are told from a young age that nonviolence was an instrumental part of his work. The principle has become so well-known that we tend to forget how truly revolutionary and affirming such nonviolent action is. Let’s take a few moments here to call to mind what nonviolent activism is, and how it can be implemented for the sake of defending human dignity.

It is easier for people to ignore a problem than to deal with the controversy of facing it directly. It is easier to abide by the status quo than to challenge it. If nothing is calling attention to the problem, then complacency continues, and the problem is given no importance in the minds of those in the community. We see this in our communities and how they confront abortion and euthanasia, two of the most prominent human rights issues to date. The most prominent argument, repeated ad nauseam to drown out the ‘naysayers’ is that taking the fetus’s life or killing the individual in a euthanasia situation is the individual’s choice. The main fallacy with this argument is that it is not meant to support abortion or euthanasia, but rather to silence any opposition or question. It is what it is, so there’s no point in intervening. It is not a supportive claim but a passive one, which does nothing to forward discourse, and even hurts the proponent’s side.

We cannot leave situations stagnant if they are to be solved. We cannot let people go ignored and uncared for. Instead, these issues must be brought to the attention of the community. Nonviolent direct action fixates the attention of the community, not onto the activists themselves but on the injustice. It makes the community focus long enough to realize that the problem is too large and harmful to ignore. The community is thus compelled to act on the action. Even if they act against the activists, they are still forced to reexamine their beliefs. A fantastic example is the recent arrests made after the sidewalk chalking incident outside of a D.C. Planned Parenthood. While the pro-choice community may not agree with the message the pro-life activists were writing, they can see that the injustice done to the latter were unfair, and need to be rectified. It allows for the reevaluation of the treatment of others based solely on belief, and allows for some compassion. Self-awareness is always the first step to change.

But what of the following quote: “A riot is the language of the unheard”? This quote has reappeared especially in the face of the ongoing protests in the United States of late, but woefully out of context. Dr. Martin Luther King, Jr. was expressing the fact that riots are indeed the result of a people so devastated and hopeless due to injustices. However, he was not condoning such action. Violence is the supposed solution when people have lost utter hope in themselves and in their communities to create change. Because they believe they are powerless to change the circumstances of their time they fall into despair. The powers that be then respond in fear rather than with hopeful purpose, failing to create the change that is needed and desired.

Nonviolent action is an expression of hope. It affirms the belief that people can change, that their hearts and minds can be more in tune with the needs of their fellow persons. Nonviolent activists bring an awareness to the injustice that is not motivated by fear or resignation, but rather by the belief that humanity can do better for its people. Those who use nonviolent protest or demonstration call for hopeful solidarity in this shared aim. Even if the activist does not seem to succeed in changing minds immediately, their actions move hearts. That movement is more crucial than anything. If even momentary consideration is given to an injustice by a community,it almost inevitably leads to a process of exposure, accountability, and restoration of justice. It leads to progress grounded in love of others

Dr. King believed in nonviolence because he knew how powerful it was in organically appealing to the deep tendencies of the human heart. Nonviolence is written all over the pages of his work, from the Freedom Rides to the marches in Selma, Birmingham, and Washington, D.C. Peaceful action cries through the words of his sermons, speeches, and letters. Now it calls to us, activists in a world hurting from constant attacks on the human person. Let us be a people of hope and lasting change, using nonviolent movement to call our communities to attention and action.

Consider your own efforts in the pro-life movement. What have you done recently to support human dignity and rights at all stages of life? Do you call the attention of those around you to greater awareness? To women like Keisha Atkins and Laura Hope Smith? To babies like Baby Myles, whose life was saved by someone's peaceful action?

Want to do more to take part in nonviolent action?

Here are some ideas to start: Help sidewalk counsel like this woman or host a pro-life chalk  day at your local abortion facility; Take part in flyering or wearing pro-life gear to promote discussion [August 26th, the centennial of women's suffrage, is a great day to begin with #PurpleSashRevolution's "Equal Rights for Preborn Women" gear!], and sharing more information and lobbying against current proposed life-threatening laws in our state, especially the “ROE” Act, whose deadline was extended to November 12 of this year.