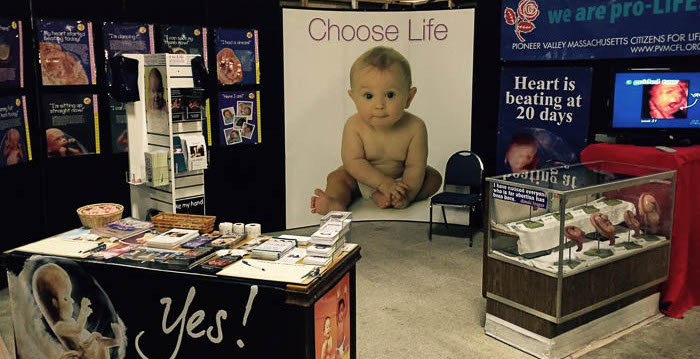 “We are very open and approachable,” says Peggy Bradford, who is in charge of setting up and staffing the pro-life booth with volunteers. “People are naturally curious. Our job is to tell them the truth about fetal development, and to let them see that it really is a baby in there.”

“We don’t accept any money at the booth, and everything we offer is free. One of the most popular items is a little two-inch long plastic model of a 12 week old pre-born baby. We have them in pink and brown. Kids and teenagers will pick it up and look at it. We tell them that, ‘You were that size once.’ Everything is anatomically accurate. Another item that we like to give away is a card or brochure with a time line showing the number of days from conception it takes for everything to develop. Did you know that the baby’s eyes, lungs, fingers, toes, taste buds and fingerprints are formed at 11 weeks, and that the baby can swallow and respond to stimulation at 12 weeks, before the mother can yet feel anything?” according to John Diggs, MD, who also volunteers a the pro-life booth.

“In the early days, we used to get some vocal opposition,” says Peggy Bradford, “but, in recent years, most of our visitors have been friendly and supportive of the pro-life cause. Those who are not pro-life, either pass us by, or they stand off and watch us from a distance. It’s difficult to guess what they are thinking, but at least the fact that we are here gives them something to think about. In either case, we always try to be friendly and polite to everyone. If we show them love and pray for them, there is always hope that God will change their hearts.”

Some of our visitors want to talk theology, but we try to steer them away from sectarian debates. Others have questions about when life begins. Frequently, we will have a visitor who will share a personal story about how a friend or family member was saved from abortion. Often, the woman will be standing with her grown son or daughter, beaming with pride and overflowing with gratitude for the child whose life was spared.

Other stories are not so happy. This September, 2017, a man stopped by when I was working at the booth with Dr. Diggs. With tears in his eyes, he told us how his wife had undergone an abortion, without his knowledge. After a few years of living with this untold secret, the marriage relationship had deteriorated to the point where the couple had divorced, and, as they were divorcing, his wife had finally told him, not only about her abortion, but the gender of the child who had never been born. The man, who was now in his sixties, had never had any other children. With his head bowed, he said, “You know, that was my only son.”

We also have brochures available that talk about the ethical and practical implications of assisted suicide and euthanasia.

This year, four girls in their late teens or early twenties came up to have a closer look at the display cases and announced that they were nursing students, although one said she was studying physical therapy. The loudest one, who appeared to be the ringleader, brazenly announced that she would have no trouble pulling the plug on a terminally ill patient, or killing a patient who said they wanted to die. She said this, of course, in a manner that was calculated to be shocking and provocative, to impress her friends. As Dr. Diggs calmly engaged this young woman and one of her comrades in a sober, factual discussion at one end of the counter, I quietly carried on a separate conversation with another member of her group, who had some sincere questions and concerns for decisions that she might need to make for her own young life. Who’s to say whether we changed anyone’s minds or hearts that day, but at least we made some friends.