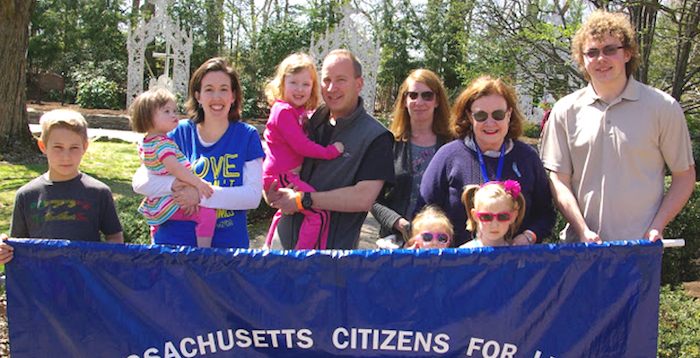 March 21, 2018 was World Down Syndrome Day. To mark that event, we bring you this article from the May-June 2013 issue of MCFL News.

Katie Kiley, mother of 2013 Respect Life Walk Baby Julia, spoke to the 2013 MCFL Convention on the ways that the pro-life movement can support families with special needs children. Kiley started by reading a poem, “Welcome to Holland.”

“Having a special needs baby is like planning a fabulous trip to Italy. After great anticipation the plane lands, but the stewardess says, ‘Welcome to Holland.’ It’s not horrible, it’s just different. Everyone you know is talking about Italy. ‘Yes,’ you say, ‘that’s where I was supposed to go.’ The pain will never go away, because the loss of that dream was a very significant loss, but if you spend your life mourning the fact that you didn’t get to Italy, you will never appreciate the special wonderful things about Holland.”

Kiley did not expect to have a Down Syndrome child at age 30. “We didn’t know Julia had Down Syndrome until she was born. The attending physician said gently, ‘We’ve noticed some features consistent with Down Syndrome.’”

“90% of women with a prenatal Down Syndrome diagnosis choose abortion,” Kiley said. “Advocacy organizations, such as the Mass. Down Syndrome Congress, are working to ensure women get accurate, up-to-date information with the diagnosis. Doctors are trained to give the diagnosis in a neutral manner, but for many families, the medical community only serves to deepen their fear, hurts, and confusion by attempting to schedule abortions after a prenatal diagnosis has been made or by warning of looming disaster should the child be born.”

Kiley was fortunate that the doctor on duty did not portray Julia’s birth as a bleak situation, or one that should have been remedied sooner. “I’ve heard horror stories of doctors attempting to schedule immediate abortions or telling a woman who’s just given birth that she should have had an abortion because having a child with Down Syndrome would put such a strain on her marriage that she would end up divorced.”

Reactions from friends and family were mixed, Kiley said. “Some people told me it was a blessing, others apologized, some didn’t respond. My head was spinning. I was tired and confused. I didn’t need people telling me how to feel, I needed people to tell me they were there for me to support me through this journey.

“In the hospital, I was given a book about babies with Down Syndrome. The book cover had a picture of a baby boy. I couldn’t look at that little boy for the first month. I needed time.”

Shortly after Julia’s birth Kiley became acquainted with an organization called Reece’s Rainbow that helps families in the US adopt children with special needs through overseas adoptions. “I was touched by the Reece’s Rainbow motto, ‘Because every family deserves the blessing of a child with Down Syndrome.’ By then I agreed with that sentiment, but my husband hadn’t. He does now, but it takes time.”

Due to the horrific statistics concerning Down Syndrome and abortion, Kiley is reluctant to talk about the difficulties of raising Julia. “I’m afraid if I say it’s hard, people will look at those 90% figures and conclude that those women made the right decision,” Kiley said.

“I’ve always been pro-life and would never consider an abortion, but the truth is, it’s hard. That doesn’t mean that Julia isn’t a blessing or is a lesser human being. She’s just a kid who comes with some extra work.”

“It would be helpful if people recognized those struggles. Well-intentioned people can create a stereotype, ‘those Down’s kids, they’re angels, they’re so loving.’ Julia does have a unique capacity for love, it is her primary means of engaging other people. But at two years old, Julia is still getting nutrition primarily from a bottle.”

Kiley is busy with Julia’s many specialty appointments at Children’s Hospital for conditions common in Down Syndrome babies. She has a congenital heart defect and problems with her thyroid. Her speech is delayed due to cognitive delays, low muscle tone and hearing loss. Julia wears orthotics on her feet for extra walking support. Said Kiley, “We’re blessed to have many resources, the doctors have been great.

“But it can still be hard, taking two kids to the Longwood medical area, waiting two hours for a doctor running behind schedule, driving home with a screaming baby in the car. It would be great for people to recognize that these stressors exist.” Kiley recommends that people help by making a phone call, visiting, or bringing a meal to rejuvenate weary parents.

“The Mass. Down Syndrome Congress (MDSC) is doing a great job supporting families, educating professionals, and empowering individuals. They work tirelessly to show the many things that people with Down Syndrome can do. There are more opportunities than even 20 years ago.

“Last year Governor Patrick signed a bill titled, ‘An Act Relative to Down Syndrome Genetic Tests Results.’ This bill requires providers in Massachusetts to offer accurate and culturally sensitive information when delivering a prenatal diagnosis of Down Syndrome. Expectant parents are connected with current parents of Down Syndrome babies.

“However, MDSC falls short by not taking a stand in the abortion debate. They’re staunch advocates for people with the condition, but not for the unborn. With the development of new noninvasive tests, statistics that 90% of Down’s babies are aborted could rise even higher.”

Kiley concluded, “The pro-life movement can help by stressing not the potential of people with disabilities, but their inherent worth. Julia’s worth comes not from what she can do, but because as Doctor Seuss wrote, ‘A person’s a person, no matter how small.’ ”