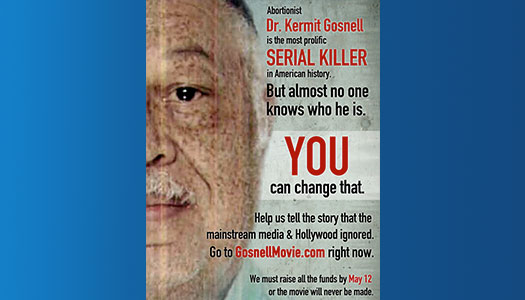 The movie Gosnell is very effective and moving, and is based heavily on the report of the grand jury in Philadelphia. The documentary reports the case of Kermit Gosnell, the Philadelphia abortionist convicted in 2013 in the first degree murder of three infants and involuntary murder of a mother following an abortion. There may have bee hundreds of other murders of newborn infants, not to mention the thousands of abortion. His abortion facility was called a house of horrors for the unspeakable and disgusting conditions that investigators called the worst they’d ever seen.

The film really moves along and is very persuasive. It will not open in general release until 2017, but the filmmakers have made a special showing available for us on November 10, to which the public is invited for free. This will be a great motivator to keep going after the election. You'll want to mark your calendar and register right now!

The movie will be at Boston College's Devlin Hall with a meet and greet starting at 6pm and the movie at 7pm. To RSVP call 617-969-8383 or email [email protected].