Diagnosed Disabled? That Means Nothing About Your Current Worth or Ability

Collette was born, which is more than can be said of 100% of her peers in Iceland, where if you're diagnosed with this syndrome in the womb you're scheduled for immediate termination. But due to the fact that in the United States some safeguards still exist to protect the preborn, Collette was born. She grew up in Ridgefield, CT, completed a 3 year degree at Clemson University in just 2 years -- and developed a cookie that friends and family raved about, calling it, "amazing!"

Down syndrome had not stopped her from living a full life, or even one that those without her different-abilities would have called standard. But when she moved to Boston, she was stunned to run through day after day of friendly but condescending rejections from potential employers. Messages usually ran, "It was great to meet you, Collette, but at this time we feel you are not a good fit for our company.”

Because she was determined not to let rejection stop her from earning a living and doing meaningful work, Collette decided to turn her passion for baking into a business.

"I was not only determined to show everyone how capable people with (dis)abilities are, but my mission is to open production facilities across the country and employ thousands of (dis)abled people!"

In late 2016, the Boston CBS TV affiliate featured Collette and her company on their nightly news program. Soon, she was flooded with orders. The national news picked up her story, and Collettey’s Cookies went viral. She has been featured on CNN, Good Morning America, MSNBC, Inside Edition, BBC, and many other print and television media outlets around the world. She has sold over 180,000 cookies to date and Collettey’s Cookies now employs 13 people, several with disabilities. Collette travels around the country to share her inspiring story, and constantly encourages people to focus on their abilities rather than what they can’t do. Her ultimate goal is to work with lawmakers in Washington, D.C. to create policies that would increase employment opportunities for people with disabilities.

Collette sets a challenging example to us -- and to our abortion-distorted society -- one that forces us to look into the face of a woman whom our legislature might legally declare better off dead, and our employers called unemployable, not a good fit. 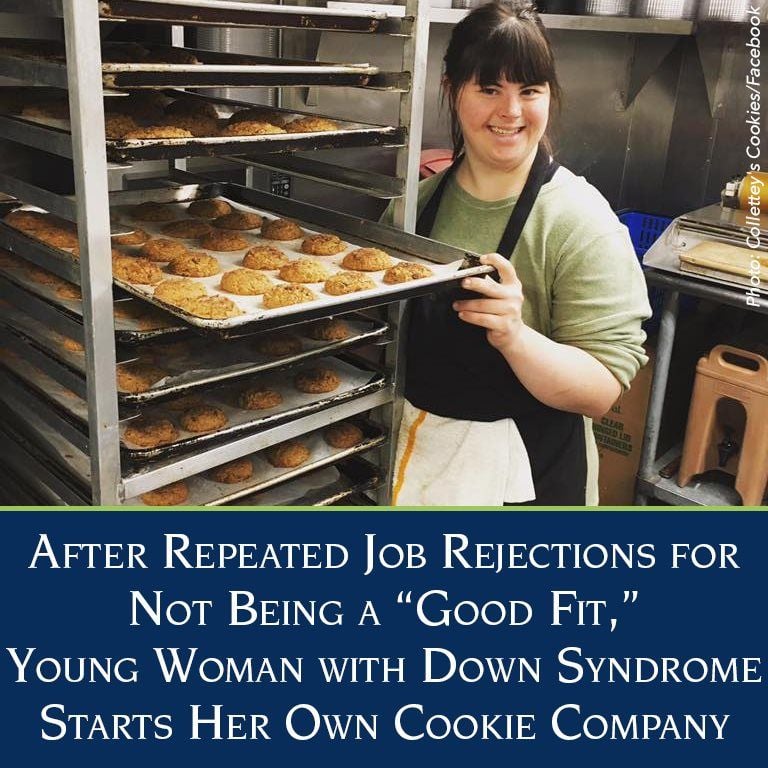