Culture Column: Neither Safe, Nor Popular

Neither Safe, Nor Politic, Nor Popular: MLK and Selflessness

These words were used to describe Aslan, the creator and king of Narnia, in the book The Lion, the Witch, and the Wardrobe by C.S. Lewis. They were used to emphasize the fact that, while there were no guarantees of comfort in following Aslan, there was the assurance that one would be morally right and secure in doing so. These words stuck out to me while studying Dr. Martin Luther King, Jr.’s activism methods. Surely Dr. King would have agreed that these words could fit into choosing to adhere to a nonviolent movement.

This brings us to our last and best quality of Dr. King’s activism: selflessness. Selflessness is the quality by which a person uses what they possess to aid a purpose greater than themselves. When someone finds a cause for which he or she is passionate, they are naturally moved to dedicate whatever they can to help. They may commit their talents - be it in the arts, in finances, in leadership, or in any other capacity - to help the cause in a creative way. They devote their time to thinking up and executing new ways to promote and forward their cause. Sometimes it is necessary for them to sacrifice a good, such as time or money. Individuals give of themselves to something more than themselves not because it serves them, but because they believe the ideals are worth what they give.

Dr. King was certainly a model of selflessness. He traveled to cities and towns all over the United States for the purpose of civil rights. For decades, he devoted public actions, speeches, sermons, and  what little money he had for the good of the movement. Dr. King sacrificed his own good name - even in the eyes of the federal government and most of the country - to buy equality for his brother and sisters in the human race. In fact, MLK's approval rating overall during his time in action hovered around 32%. He risked his personal safety, often facing threats, beatings, and even arrests. Ultimately, he gave his own life. Looking back over sixty years later, it is easy to forget how radical his actions were during his time. 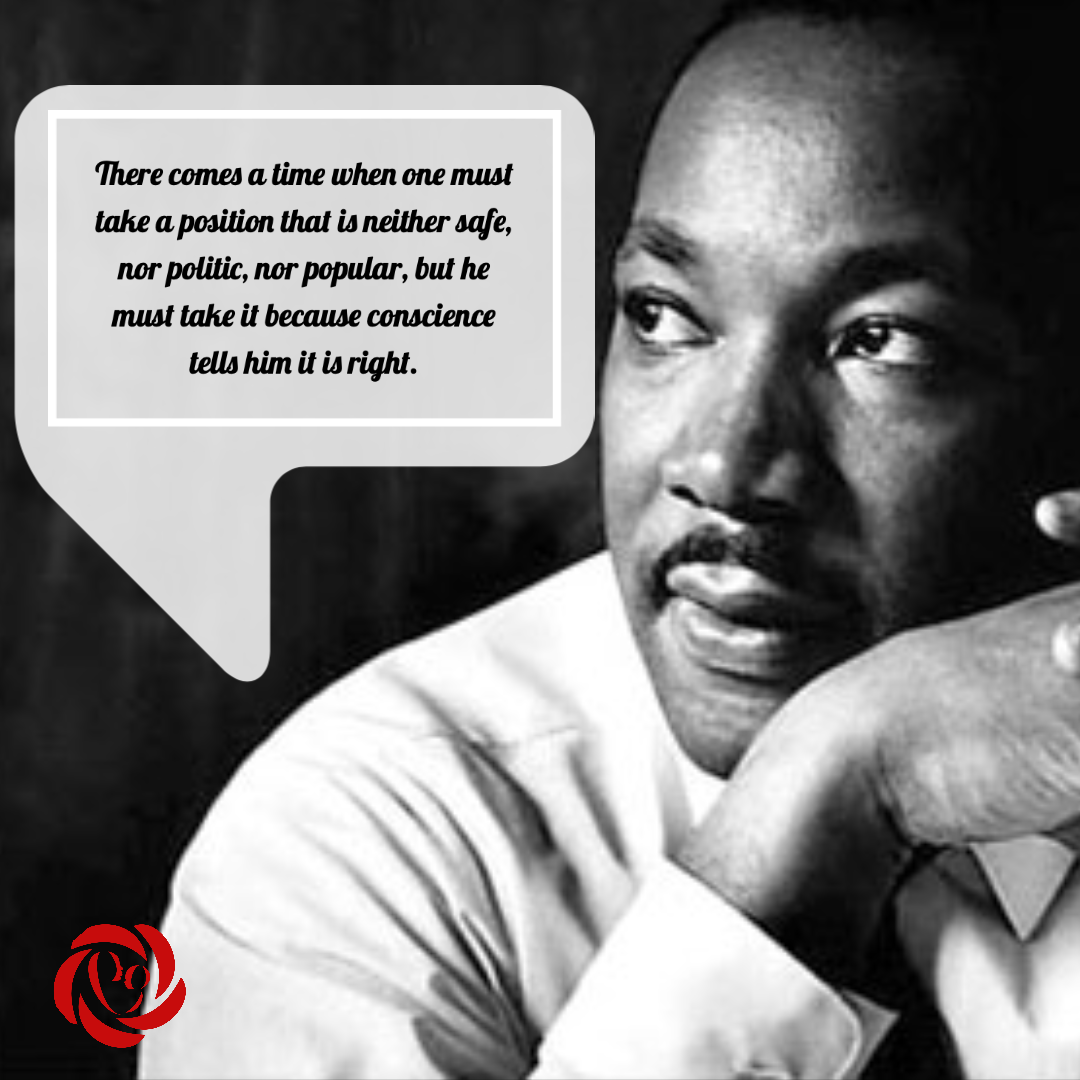 Pure selflessness made his actions radical and unpopular. Nothing he did offered him glory in his time, even among some of his peers. His choices, such as acts of civil disobedience, only left him turmoil, strain, and eventually death. But self-benefit was never the goal. Dr. King gave of himself so freely because he believed that human dignity was a cause worth fighting for, a cause worth all the sacrifices and strain. As he reflected, “There comes a time when one must take a position that is neither safe, nor politic, nor popular, but he must take it because conscience tells him it is right”. Activism is not a self-serving act, but rather one that is aligned with the cause of love for others.

Our dedication to the pro-life movement must reflect this same kind of self-giving. We understand that we work for the cause of human dignity, which is worth all investment and love. We all have something we can give, be it a talent, what we do at work or at home, financial contributions, or even a voice to speak out against oppression. Consequently, we all have the capability to fight against injustices everywhere. This dedication does not mean ignoring our needs, or draining ourselves completely. After all, we cannot give the energy and attention that we do not possess or give to ourselves. Instead, it means understanding what we have, providing for what we need, and then using whatever else we have for the good of others.

Dr. King was a radical model of selflessness, yet his dedication is something we can all imitate. May we keep his example in mind as we move forward, for the good of humanity and dignity.

How can you give of yourself to protect the vulnerable among us? What talents do you have? What could you give?