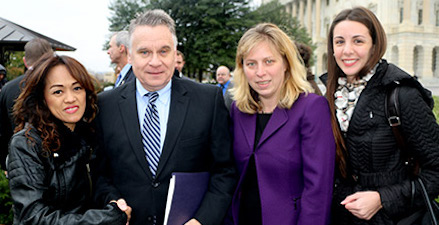 There are many pro-lifers in the ranks of healthcare professionals, which makes sense given their profession is about saving lives and that is based on science, which tells us that life begins at conception. However, those pro-life professionals are increasingly being forced to take part in medical procedures that violate their consciences.

Now Congress has before a bill, the Conscience Protection Act of 2017, that would protect those in federally-funded healthcare systems who object to performing or participating in abortions. At a press conference earlier this week, three nurses spoke out in favor of the bill.

At the event, three nurses shared personal testimonies in support of the bill: Cathy DeCarlo, a New York nurse forced to help with abortion, Sandra Mendoza, an Illinois nurse who lost her job because she wouldn’t aid in abortion and Fe Vinoya, a New Jersey nurse who risked her job for refusing assist with abortion.

Of the three nurses, DeCarlo spoke first. She began her nursing career in the Philippines to follow her “passion for helping patients” and to serve God.

“My faith in God and the Catholic Church’s teaching about the sanctity of all human life further inspired my career in nursing as it encouraged me to serve all those who are sick with gentleness and respect,” she added. “My faith also informed my conscience to never harm or intentionally take the life of an innocent person.”

This bill is supported by National Right to Life Committee, of which MCFL is the state affiliate for Massachusetts, and is sponsored in the US House by Rep. Chris Smith, R-New Jersey.