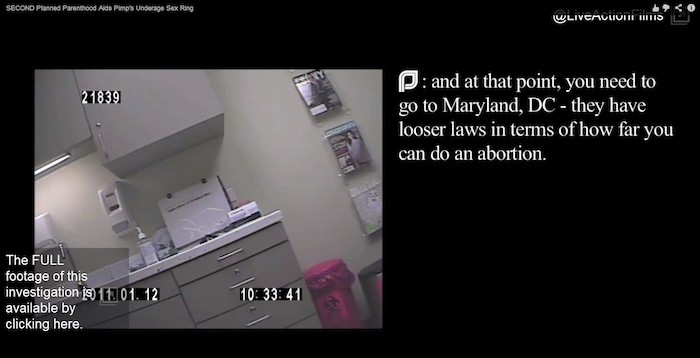 Third in a series: The Abortion Industry Plays a Key Role in Human Trafficking

A series of seven investigational videos resulted from LiveAction's attempt to find out how Planned Parenthood would respond to sex traffickers seeking services, including abortions, for their underage sex slaves. Undercover footage exposed Planned Parenthood employees aiding sex traffickers by suggesting how to get abortions and birth control for their 14- and 15-year-old victims.

LiveAction reports, “The average age of entry into child prostitution is 13, and some girls have been subjected to multiple abortions. An encounter with any health care worker should be an opportunity for trafficking victims to get help to escape from slavery.”

After being exposed Planned Parenthood claimed to the media that it would retrain thousands of staff members across the country to properly report suspected sexual abuse of minors to authorities.

A Planned Parenthood manager in New Jersey coaches a man and a woman posing as sex traffickers on how to secure secret abortions, STD testing, and contraception for their underage female sex slaves, and how to make their whole operation “look as legit as possible.”

The manager warns the pimp and his prostitute to have their trafficked underage girls lie about their ages to avoid mandatory reporting laws, and advised, “If they’re a minor, just tell them to put down that they’re students.” She says, “For the most part, we want as little information as possible.”

Following the release of the video, Planned Parenthood fired the clinic manager. The executive director of Planned Parenthood of Central Jersey said, “We were profoundly shocked when we viewed the videotape released this morning, which depicted an employee of one of our health centers behaving in a repugnant manner that is inconsistent with our standards of care and is completely unacceptable.”

Undercover audio revealed yet another Planned Parenthood facility, this time in Washington, D.C., more than willing to aid and abet a self-identified sex trafficker exploiting underage girls, including girls from other countries. A woman posing as a prostitute and “manager” of young girls for “sex work” meets with a staffer at Planned Parenthood’s Egypt Center on Minnesota Avenue, NE, in Washington, D.C. The Planned Parenthood staffer counsels the sex trafficker on how to get the girls tested for STDs, the best way for them to get an abortion, and how to work the system if they don’t have health insurance.

A 2017 Follow-up Live Action investigation also shows Planned Parenthood didn't report sex-trafficking to the authorities, as it has claimed. PP lied to the media that it was retraining staff to recognize child sex traffickers, instead it trained staff how to identify undercover journalists investigation the facilities.

Live Action also used public records to check the abortion chain's claim that it had reported the suspected sex traffickers to authorities. Responses from law enforcement show that PP repeatedly failed to report the suspected crimes to police or child protective services.

In 2015 and 2016, Live Action made a series of Freedom of Information Act records requests of law enforcement and child protective services in the states and cities where the alleged trafficking occurred. The responses show that out of five states and Washington, D.C., only one state -- Arizona -- had responsive records showing Planned Parenthood reported anything to authorities.