The tragic and unbelievable legislation that has just passed in our near-neighbor, New York State, has elicited the following responses.
Al DiLascia writes:
"The New York State Legislature passed a bill on Tuesday, January 22, 2019 that makes it legal for doctors and other health care professionals, such as midwives and physician assistants, to perform abortions up until birth for any reason in the State.

"New York State Governor Andrew Cuomo was expected to sign the controversial Bill at a reception in the Executive Mansion immediately after legislators voted to approve it.
"What have we become as a society? Nothing is more precious than the life of a beautiful, innocent, helpless baby." 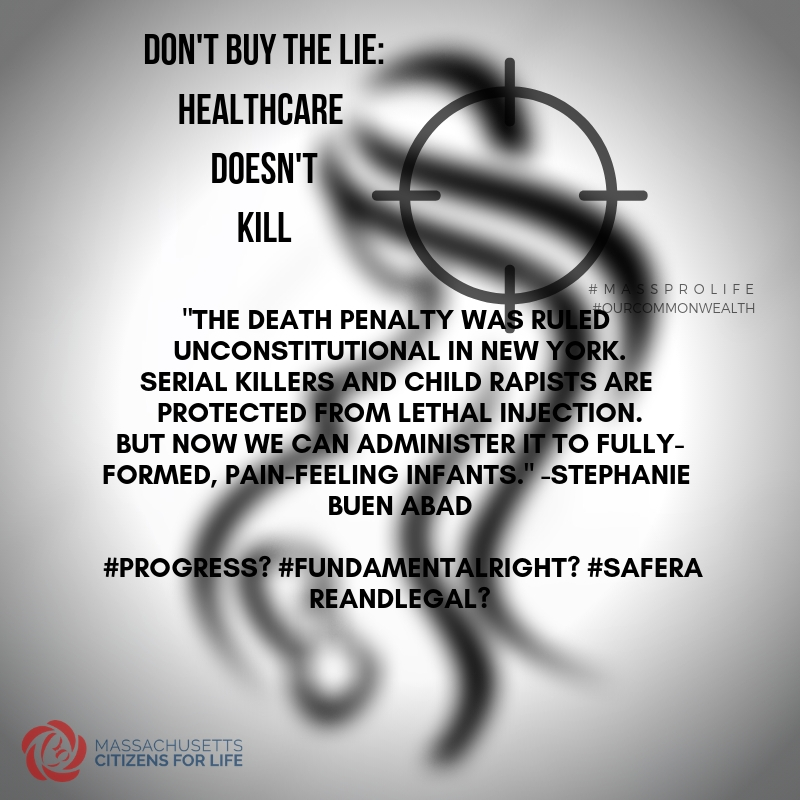 From Ellen Kolb, a dear friend and fellow pro-life advocate in New Hampshire:

"To my friends who are heartbroken (rightly so) over NewYork's new abortion law: you must realize [our] laws are nearly identical. Want to change that? Put your grief and anger to work HERE AT HOME."

We wholeheartedly support our fellow advocates for women and the preborn in New York State. As Abby Johnson remarked in an immediate reply to this event, " Abortion [...] it’s a moneymaker. Women and their unborn babies are seen as dollar signs. Empowerment means telling them “no, you cannot have this baby and still go to school or have a career; abortion is your only option.” Abortion is an easy sell, especially in states like New York where there are few, if any obstacles, to having one, and where the cost of living is high."

When did we become a society that accepted selling death? Or the insane contradiction of outlawing capital punishment while celebrating murder?

Join the movement in Massachusetts to stand for our most vulnerable by pledging today: Join and Support.