by C.J.Williams, Director of Community Engagement

"I don't think my baby is the miracle baby," she said. "I think they all are miracle babies. There is just no way around it. She is just Lyla."

If I could put it any more succinctly than Lyla's mother, I would. But the mom of barely 21-week old Lyla Stensrud has summed up the reality of a single human life's value in the way only a mother can.

Kudos to The Herald for Abortion Myth Article

Re: Abortion myths by Laura Hollis

My thanks to the Herald for having the courage to print Laura Hollis’ excellent piece exposing the many false arguments about abortion and the mischaracterizations of pro-life people. (“Planned Parenthood peddles abortion untruths,” Nov. 26). It is hard to understand in an age of ultrasound how anyone can deny our common humanity with the child in the womb. The unfair characterizations of pro-life people frequently found in the media make me wonder if any fair-minded journalists have ever had a conversation with the many volunteers who give their time to come to the aid of women with untimely pregnancies. The hallmark of a great society is the compassion it shows toward its most vulnerable members. Kudos again to the Herald.

Abigail Adams & Equal Rights for All

We sometimes feature fellow organizations whose missions or activities align with the quest to guarantee respect for every human life. One of those organizations is The Abigail Adams Institute.

Our Chairman of the Board has said well that the AAI is an organization you truly should all know more about.

Based in Cambridge (14 Arrow Street, in the heart of Harvard), the Abigail Adams Institute is a scholarly enterprise presenting beautiful humanistic programs in very much the same liberal arts spirit as our  Lincoln Forum.

“I have sometimes been ready to think that the passion for Liberty cannot be Eaquelly [sic] Strong in the Breasts of those who have been accustomed to deprive their fellow Creatures of theirs. Of this I am certain that it is not founded upon that Generous and christian principal of doing to others as we would that others should do unto us.”

Seeing Our Responsibility For All

[This is part of a blog series, entitled ReVitalize, and is a project of the MCFL Lincoln Forum's Certificate Program in Human Dignity. Curious about our next reads? Look out for the next post, or consider joining us in December, or January. More details on registration can be found here. This reflection is specifically Christian, but its reflection on the question of human dignity and solidarity as rooted in love is universal. ]

The moral danger in serving a noble cause is that we are tempted to become self-righteous. None of us who thirst for justice puts this danger behind us. Dostoevsky with supreme art shows us this predicament in those incomparable chapters from The Brothers Karamazov, "Rebellion" and "The Grand Inquisitor," both of which we will be exploring on December 1st, for the third session of the Social Ethics and Solidarity Certificate at Massachusetts Citizens for Life, which will also approach the question of the American experiment through the writings of John and Abigail Adams. What are the conditions for justice, for an ordered whole? Is not love always the ground? We will also meditate upon W. H. Auden's Horae Canonicae.
Dostoevsky shows through the Elder Zosima the humane (because divine) path to justice and universal reconciliation: love and joy and substitutionary suffering. If we see the suffering of children (so graphically recounted by Ivan Karamazov in "Rebellion"), if we pro-lifers see it, what is the true response: righteous fury, or an ever-greater love?
"Brothers, have no fear of men's sin. Love a man even in his sin, for that is the semblance of Divine Love and is the highest love on earth. Love all God's creation, the whole and every grain of sand in it. Love every leaf, every ray of God's light. Love the animals; love the plants; love everything. If you love everything, you will perceive the divine mystery in things. Once you perceive it, you will begin to comprehend it better every day. And you will come at last to love the whole world with an all-embracing love."
To see the sense in this darkling realm, we must love. And love means encompassing that darkling realm, absorbing its ponderousness within ourselves, swallowing the darkness in the morning star that has dropped from heaven into our hearts. Only in the Cross of love do we attain to the wonder of cosmic harmony, so crucifixion and joy are inseparable.
"My friends, pray to God for gladness. Be glad as children, as the birds of heaven. And let not the sin of men confound you in your doings. Fear not that it will wear away your work and hinder its being accomplished. Do not say, 'Sin is mighty, wickedness is mighty, evil environment is mighty, and we are lonely and helpless, and evil environment is wearing us away and hindering our good work from being done.' Fly from that dejection, children! There is only one means of salvation, then: take yourself and make yourself responsible for all men's sins; that is the truth, you know, friends, for as soon as you sincerely make yourself responsible for everything and for all men, you will see at once that it is really so, and that you are to blame for everyone and for all things. But throwing your own indolence and impotence on others, you will end by sharing the pride of Satan and murmuring against God."
Total, radical solidarity is knowing that our responsibility for others is endless. 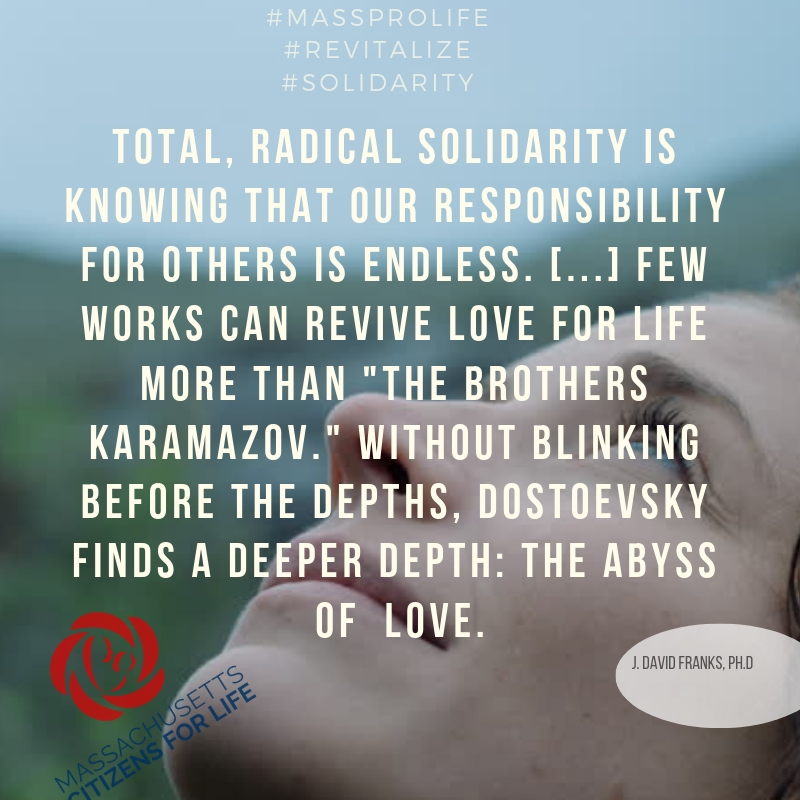 Come join in the discussion! #Revitalize our world with the tools of great literature, and the human relationships and respect they engender. We invite you to respond, or post your own reflections on social media, with the hashtag #Revitalize and #MassProLife.
Read more
Posted on November 29, 2018 3:00 PM
Share
Add your reaction

Today, The Ruth Institute, founded to aid those damaged and isolated by the sexual revolution's objectification of human lives, released this statement regarding the recent genetic manipulation experiment completed in China.

“This is appalling,” Morse, founder of the Ruth Institute, said. “Supposedly, the gene editing will make these twin girls resistant to the AIDS virus. Whether or not that’s true, it opens the door to all sorts of manipulation. Will gene-editing eventually be used to create a class of genetically-enhanced super humans?”

What about the long-range consequences? “Obviously, the changes are made without the consent of the subjects. The altered genes will be passed on to any offspring."

Quoted as well, is Chinese genetic scientist, He Jiankui...

Massachusetts is a wealth of historical depth and opportunities. From Bunker Hill, to Lexington, from Walden Pond to the Old State House, we're steeped in a tradition that began with recognizing and fighting for individual human rights. Perhaps we who live in the Commonwealth too easily forget what our state offers in terms of memory.

Perhaps we forget that memory is often what roots our feet in present action, and supports our current fight for the same rights.

One highly underappreciated gem in our state is the birthplace of Susan B. Anthony. A well-known feminist, and campaigner for equal rights, Susan B. Anthony is less well known for her just as fierce opposition to the creeping practice of abortion 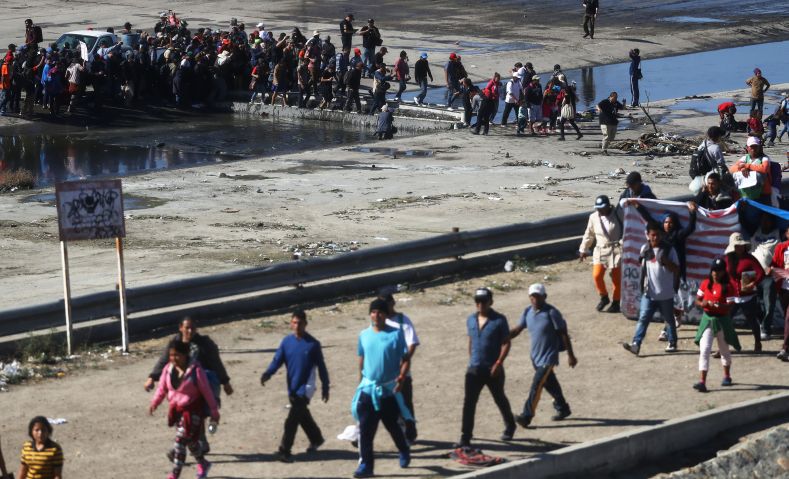 Pro-Life Feminism and Overcoming the Abuse of Power

by J. David Franks, Ph.D., Chairman of the Board, MCFL

[This is part of a blog series, entitled ReVitalize, and is a project of the MCFL Lincoln Forum's Certificate Program in Human Dignity. Curious about our next reads? Look out for the next post, or consider joining us in December, or January. More details on registration can be found here ]

The well-being of women and the well-being of the unborn are inseparable concerns. Because of this fact, during the first session of the Social Ethics and Solidarity Certificate program, we looked at J. S. Mill’s The Subjection of Women(published in 1869) as one of our orienting texts.

Mill was grappling with legal and political impairments imposed upon women (denied the vote, barred from the professions and universities, compromised in their property rights) which have since been largely remedied. But he was also grappling with the social and intimate roots of these public impairments. And here the picture is very complicated indeed. Perhaps the greatest symptom of a persisting disorder in the relations of men and women is the epidemic of domestic abuse. (We discussed Judith Herman’s Trauma and Recovery during the second session as a natural sequel.)

Why address such questions in a pro-life course?

#GivingTuesday -- Give More Than Stuff, Give Life 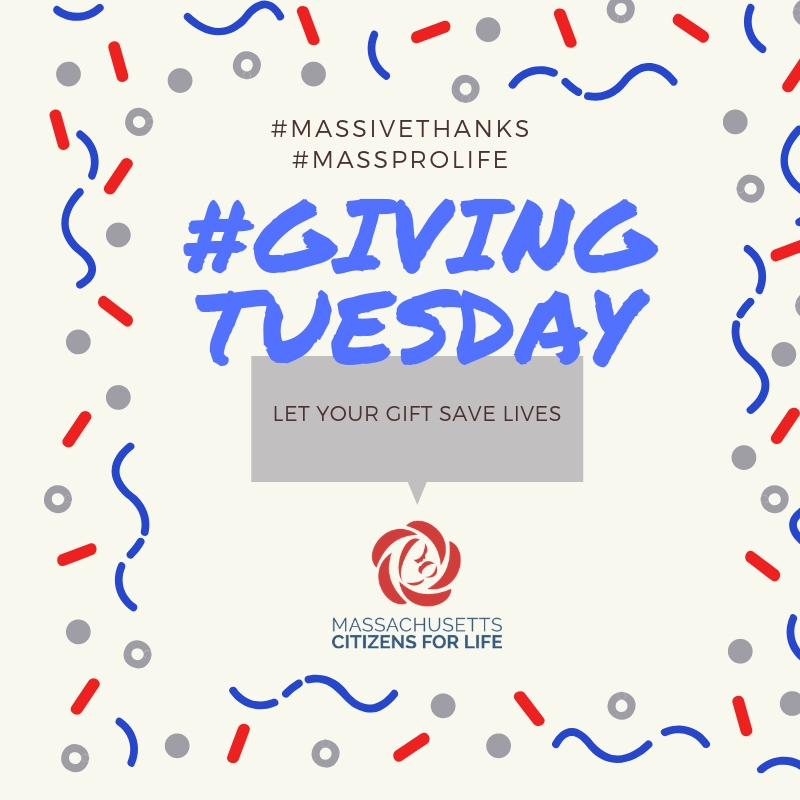 Giving Tuesday gives the nation a chance to turn towards giving, rather than the consumerist taking so often tangled up with the holidays. At MCFL, we one-up that theme: Giving is good, but giving life is even better.

When you donate now, this coming weekend after Thanksgiving, or on Tuesday, November 27th itself, your financial gift can save a human life.

"I wouldn't have known I had another option if you hadn't been out here."  Lilly (name changed for purposes of anonymity) met me in front of Planned Parenthood while I was helping others start sidewalk counseling. She was pregnant.

"You know what? I'm never bringing my girlfriend here. That's whacked. I mean, look at that [baby]!"  Wayne (named changed) pointed at the handout I had given him. "I thought it was just a clump of cells."

"I learned so much. Not knowing was keeping me from talking to friends about abortion, to going out in front of Planned Parenthood. But I feel confident now I can really show a mom how valuable she is, and how important her baby is."

A recent "general comment" by The Human Rights Council on the International Covenant on Civil and Political Rights has tried to define abortion, and doctor-prescribed death, as universal human rights.

This council, based in Geneva was founded to promote and protect human rights around the world. For background, a "general comment" is a UN agency’s interpretation of the provisions of the treaties to which it is a party.

It cannot be said more forcefully: claiming abortion and suicide are “fundamental human rights" is preposterous. Ed Morrissey has rightly noted that the use of "the right to life" clause as grounds for this anti-life stance is wickedly repugnant. The going's-on of international committees often gets ignored. But this kind of push by our governing officials, nationally and internationally, should never be permitted to fly under the radar.