Ariana Gilbert: Born to be Pro-life 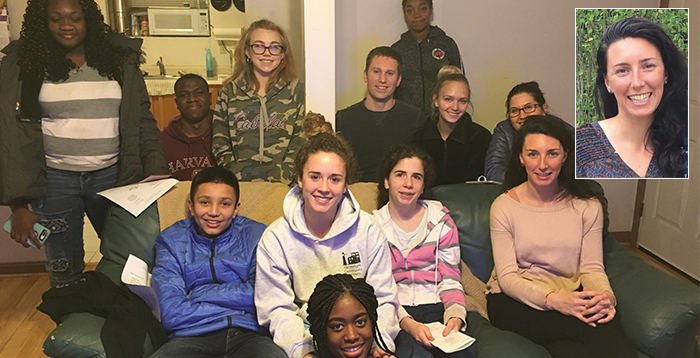 How did your childhood affect your pro-life formation?

My parents are both pro-life and they discussed their beliefs with me from a very young age. My mom was young and single when she had me, and everyone around her said the best thing to do would be to have an abortion. Thankfully she reached out to a Pregnancy Resource Center (PRC) called Pregnancy Distress and they placed her with a family that she lived with when she was expecting me. They even helped her in the time right after my arrival when she was learning how to take care of me. I recently checked to see if that particular PRC is still operating, and I was surprised to find out that not only are they open, but they have five locations in the Greater Columbus Ohio area now called Pregnancy Decisions.

When I was two my mom married my dad (not biological), and I also understood that it takes a very pro-life man to treat a child that isn’t physically his own, as his own. I’ve been blessed that both of my parents modeled such strong pro-life values for me.

My family listened to Focus on the Family radio growing up, and they often had guests on the show who discussed the full range of pro-life issues, from conception till natural death. My church also supported a local PRC, which made me more aware of the resources available for women.

How did you get involved with MCFL?

For a long time I took a very broad pro-women approach, which I still believe is fundamentally correct. The pro-life movement should be supporting teens to develop into confident and independent young men and women. If a young adult is confident and hopeful for her future, she’s less likely to look for the temporal affection and attention that can lead to an unplanned pregnancy. As a secondary teacher, I try to foster confidence and self-advocacy in my students.

However, during the past few years I’ve felt called to be more directly involved with the pro-life movement. The real catalyst was the slew of undercover videos released during the summer of 2015 that showed Planned Parenthood selling aborted children. Once I saw that I knew that if that didn’t motivate me to action, nothing would.

I also started to realize that my testimony could be used to help educate others. No one should feel like they need to have a personal testimony about how abortion affected their life to share their pro-life principles, but my testimony does make it easier for me to speak up for the unborn. My mom had essentially no one around her when she had me, and no one supported her decision to give me life. I’m grateful that the pro-life movement and Pregnancy Resource Centers exist, or I might not be here today! I think it would be a shame if I didn’t put that to use.

I reached out to MCFL simply because they’re the biggest pro-life name I’d heard of in Massachusetts. Anne Fox thought I’d be a good fit for their educational outreach programs, so I started training with Linda Thayer who has been speaking to teen groups for 35 years. My presentation has three main parts: the beauty of development in the womb, how abortion affects communities, and what local resources are available for women. Linda has been great and I’ve learned a lot by watching her present and getting her feedback.

I’ve only presented to a few youth groups so far, but they’ve been very receptive. Some of the kids’ comments show they really get it. They’ll say things like, “Wow, we did not learn this in health class,” or, “That could have been me!” when looking at abortion rates. Please be in prayer for this educational ministry though. It’s so important that we reach young people with the hopeful message that all children are worthy of life.

I’ve only been part of the MCFL Speaker's Bureau since late October. I’m humbled that MCFL thought of me for this interview, because I’m really a newbie.

Tell us your thoughts on the Summer Academy for high school students.

The Summer Academy was awesome. I felt so privileged to hear each of the speakers. They were all so well prepared, and they treated us like we were an audience of hundreds, even though we were a small group. I especially learned a lot from Dr. Rollo’s talk on doctor-prescribed suicide. I didn’t know much about the topic beforehand, and his presentation was very thorough and engaging.

The teens were also incredible. On the last day, they had to give a presentation, and as a teacher, I was thinking that they didn’t have enough time and that teens wouldn’t go out of their way to write a pro-life paper during summer vacation. These teens were something else though, they all came with a well prepared paper and were happy to present.

My only regret is that more people weren’t there. I think adults as well as teens could learn a lot from these speakers - if you’re reading this, make sure you come next year!

How does your educational and work experiences influence what you bring to MCFL?

Gordon College is a great school. They prepared me for my career as a teacher and they care a lot about students finding a vocation, not just a job. It was also nice to be around Christian believers during my college years, and I know that is a privilege because most people have the opposite experience. Gordon requires all freshmen to do twelve hours of volunteer service, and I chose to do my hours with the homeless ministry that went to the Boston Common. The school does a good job of steering students towards serving others, but I have to admit, there wasn’t an explicitly pro-life movement while I was there. One of my regrets is that I didn’t try to change that when I was a student.

I’ve worked in a few inner city schools, and that has definitely affirmed my pro-life beliefs. Many of my students are minorities, have young mothers, and qualify as low-income. Those three factors put an unborn child at a much higher risk of being aborted. Communities, such as the one I teach in, are being robbed of their children, who are, of course, their future.

What MCFL activities are most important to you?

Educating teens. It is so much easier to reach teens than adults. Reaching teens while they are still forming their world view is extremely important. Adults tend to brush things off and go about their day- even if they are sympathetic to the pro-life movement. It’s difficult to get someone who has a job, bills, and possibly a family, to listen to educational material on pro-life values.

Are you finding any time for leisure activities?

Sure! I’m big on running. I also like to read, watch a good show, and explore the Greater Boston Area.