A recent poll on which we partnered with the national advocacy organization, The Susan B. Anthony List, demonstrated a majority of Massachusetts voters oppose provisions contained in the proposed bills S.1209/H.3320. These provisions radically endanger our adult women, our teenage girls, and our infants.

The following remarks were presented by MCFL Vice President, Myrna Maloney Flynn, to the press conference at the Massachusetts State House, and are re-printed here as an open letter to our legislators.

Legislators of the Commonwealth:

I am Myrna Maloney Flynn, Vice President of Massachusetts Citizens for Life, and a resident of the Hampshire County city of Northampton.

This poll did not survey members of the pro-life groups standing here today. It surveyed Massachusetts voters -- citizens who are registered Democrats, Republicans, Independents -- voters of all party affiliations.

The results indicate that common ground exists beneath this contentious and divisive issue. That’s the real news here: Where polarization is on display in other states this year, this poll suggests we are different; on the issue of abortion, Massachusetts is poised to set a new and desperately-needed course for this country.

Legislators of the Commonwealth, your constituents have spoken. I urge you to listen. Senate Bill 1209/House Bill 3320, the so-called “ROE Act,” is not what they want. They don’t want their teenage daughters irresponsibly targeted and made easier prey for abusers. Voters don’t consider hospitals “obstacles,” as this bill suggests. To remove life-saving, resuscitative equipment that would aid viable infants who survive abortion attempts, those who are the youngest citizens in your care, is to go against the wishes of your neighbors.

And, legislators, if you support this bill, you are asking your neighbors at home to help pay for each of these inhumane provisions. How will you defend yourself when you run into them at the grocery store or when you drop your children off at school?

More importantly, what words could you possibly find to use with your own children or grandchildren when they some day ask you about the law you would have helped to pass?

Martin Luther King once said, “There comes a time when one must take a position that is neither safe nor politic nor popular, but he must take it because his conscience tells him it is right.”

Don’t vote for something your conscience will not withstand. Don’t vote for S.1209/H.3320. Instead, let’s shelve it. Let’s embrace our common ground, use it as a foundation, and build a caring, safe, dignified model for the rest of the nation to follow. The childcare proposal that Senator Warren introduced is a fine example of what true pro-life policy looks like. And we can enact it here first. Together. Imagine the widespread voter response to that!

Each of you has a unique opportunity to redefine this debate, redirect the conversation, renounce extremism, and represent Massachusetts on a national level while you do so. By your bravery, your leadership, your demonstrated commitment to--and genuine care for--the people who put you in office, you will, as Dr. King championed, do what is right. 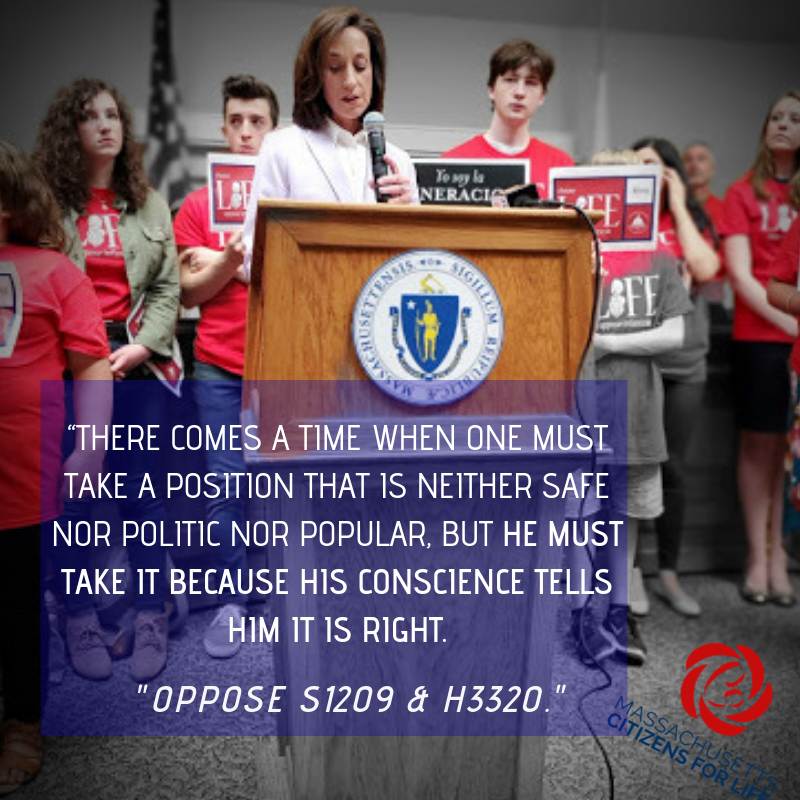