Adoption is a Loving Choice 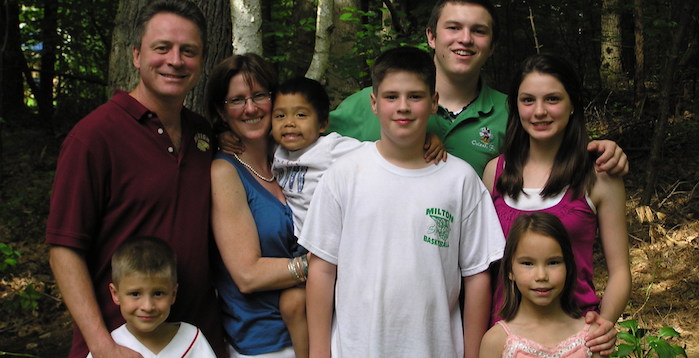 In honor of National Adoption Month, the MCFL South Shore Chapter hosted the third program in their Speaker Series, "Voices of Life," at Resurrection Church in Hingham.The event was covered by Hingham-based writer Gail Besse Ryberg. Her article will appear in the Hingham Journal.

One speaker had been an unmarried birthmother who allowed her son to be adopted by a loving couple so he would grow up with a father. One speaker was a woman adopted from Korea as an infant. Another speaker was a widowed father of six children, two of them adopted.

Different voices, different ages and stories – yet all agreed that adoption is a win-win situation. Their recent talk at Resurrection Church in Hingham was sponsored by the Voices for Life Speaker Series celebrating November as National Adoption Month.

“Each and every adoption is unique, but the one thing they have in common is that the people involved recognize that life is a precious gift,” said Priscilla Keough, who organized the series with the South Shore Chapter of Massachusetts Citizens for Life.

Speaker Catherine Morrissey of Weymouth had relinquished her son for adoption when she was a college student in 1982. At the time “I felt like a hollowed-out tree,” she said.

At first terrified when she learned she was pregnant, Morrissey had wrestled with the idea of abortion but decided against it.

She feared telling her parents, but eventually did. “I went home like the prodigal child. My parents hugged me and told me everything would be OK,” she said.

“Then the idea grew on me that I was honored to carry this child, but I knew he was meant to be raised by a married mother and father.”

After signing the adoption papers, she left a letter for her son and one for his parents, Morrissey said. “I wanted him to know I left him not because I didn’t love him, but because I did.”

Three years later she married and had another son and a daughter. Then in 2002 she got the phone call; her 19-year-old son Charlie, who lived in South Boston, was looking for her.

“We talked for three hours when we met,” she said. “He asked me why I had him and did not abort him. Then he said, ‘Thank you. I have a beautiful life.’”

Now 34, Charlie recently married and danced with both his adoptive mother and his birth mother at his wedding. He and Morrissey have shared their story with local church Confirmation groups.

Speaker Gib Gailius of Milton, who teaches at B.C. High, recounted how his family grew to include six children. Four were born to Gailius and his wife Sheila and two were adopted.

After their first three children were born, he said, “We felt a longing for another child, so we looked into international adoptions.”

They traveled to a Russian orphanage, which was the necessary first step, and returned home to await word of when they could return for their daughter. With Russian adoptions, you had to be ready to travel on short notice.

A few days after the September 11 attack on the World Trade Center, they got the call. Despite travel problems because of the recent terrorism, they left and brought their daughter home from Baby Home #2 in Russia’s Ural Mountains.

“They didn’t have many things in that orphanage, but there was love there,” Gailius said. “We saw that kids need love, not things.”

Then Sheila gave birth to another son. “People were telling us five kids is enough, right?” Gailius smiled, “but my greatest joy was in getting rid of the idea that I had to control this.”

In 2005 he and Sheila became temporary “respite” foster parents to a 3-week-old Salvadoran boy in state care with a foster mother. When the time came to return him to his single foster mother, the whole family was in tears, Gailius said.

Then the news came that the foster mother had died and the baby had no one. He joined their family.

Another foster child stole their hearts several years later, but sadly, Sheila had developed ovarian cancer so they were not able to keep him longer. Sheila passed away in 2014.

“I am still a joyful person,” Gailius said. “Sheila left us a legacy of wisdom. Her motherly love for three children she did not give birth to showed unconditional love. Because of that our kids have eyes that look at everyone as a potential brother and sister.”

Speaker Kate French, 25, of Cohasset, was adopted from South Korea as a 3-month-old. “I’ve always felt doubly wanted – by my birthmother and by my parents,” she said. “I have a great life.”

In Korea there is still a stigma attached to an unwed pregnant woman and to a child born out of wedlock, she said. “I would have been considered a second-class citizen. My birthmother knew this and gave me a chance for a better life. I wouldn’t have had two loving parents otherwise.

“And on the flip side,” she grinned at her parents who were in the audience, “I think I’ve made their lives better as well.” They smiled back.

“I wonder what my parents’ lives would have been like if I wasn’t here,” French said. “I had a high school friend with a serious eating disorder. I wonder what would have happened to her if I hadn’t spoken up about it. We never know how people will affect our lives.”

To someone struggling with an unplanned pregnancy, French said, “I’d tell them to consider adoption. It’s only nine months of your life and it means an entire life for someone else.”

For information on the South Shore Chapter of Massachusetts Citizens for Life, contact Helen Cross at 781-285-9985 or helenharriscross@gmail.com.

Photo caption 1: Gib and Sheila Gailius with their six children, two of whom were adopted.

Photo caption: 2: Kate French of Cohasset; Gib Gailius of Milton; Catherine Morrissey of Weymouth spoke of their positive and life-changing experiences with adoption.