A Fatherhood without Borders: Paternity and the Expansion of Life 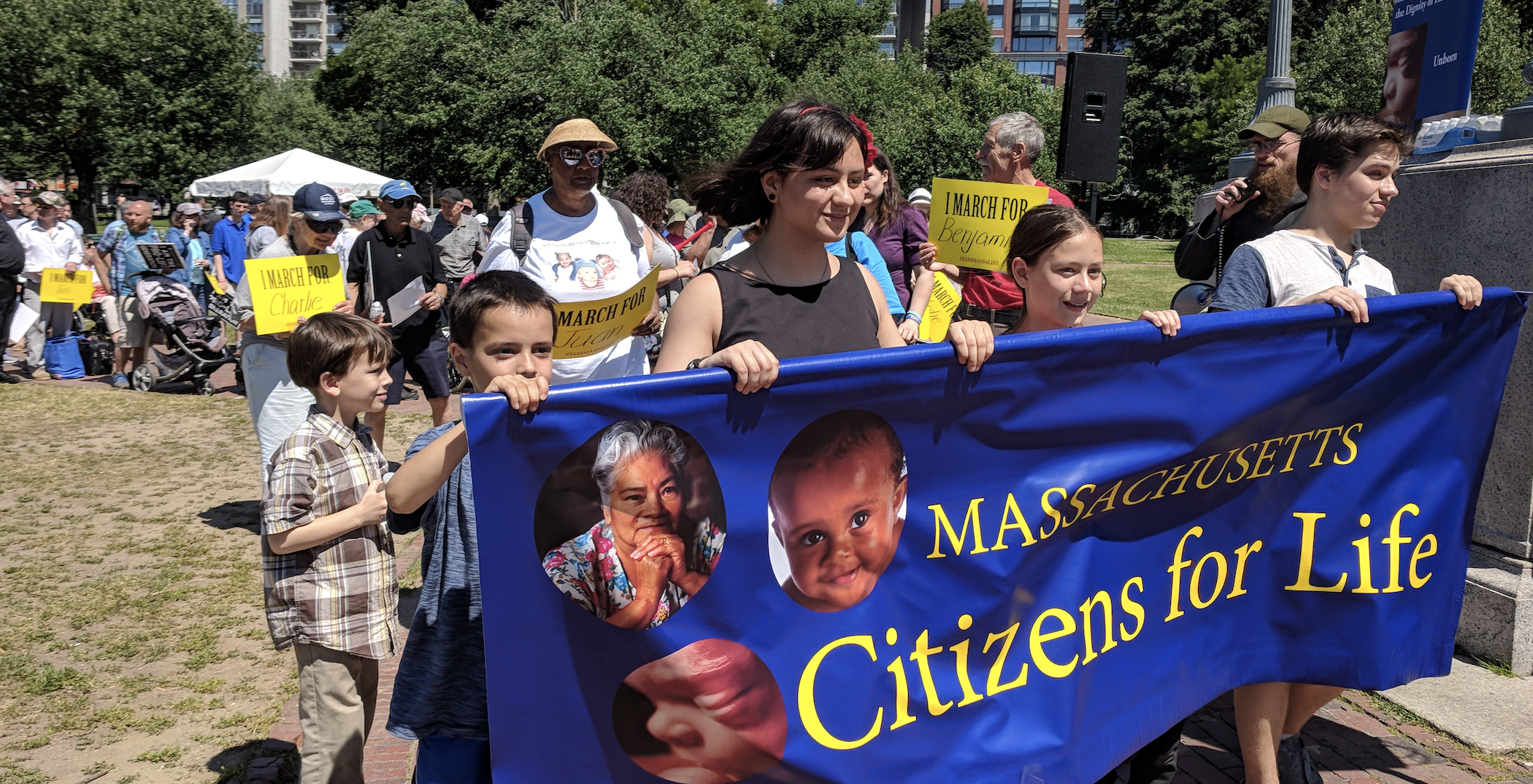 By Dr. David Franks, Chairman of the Board of Massachusetts Citizens for Life

When a man joins with a woman and a new human life comes into existence, a new father is created. Nothing will ever change the fact, no matter how long the child lives. The man has become a father and, especially the first time it happens (if natural dynamisms have not been short-circuited), once he’s made aware of the fact, he begins to grow into the specific responsibility that is paternity, his soul gestating within the womb of the providential universe—unto a new form of care.

This year’s Mass. March for Life took place two weekends ago, on Father’s Day. This conjunction inspires meditation upon the necessity of paternal care to generate a culture of life.

I’ve come across no better expression of this nexus than what the great French poet Charles Péguy writes in The Portal of the Mystery of Hope. He understands that the world goes on solely because of children, and a father strains like Atlas to sustain the world—even to make it ramify beyond inertia.

“My three virtues, says God./Master of the Three Virtues./My three virtues are no different than men and women in their homes./Children are never the ones who work./But no one ever works except for children./It’s never the child who goes to the field, who tills and who sows, and who reaps and who harvests the grapes and who trims the vine and who fells the trees and who cuts the wood./For winter./To warm the house in winter./But would the father have the heart to work if he didn’t have his children./If it weren’t for the sake of his children.”

These weeks have also seen the tragic spectacle on our southern border, with children taken away from mothers and fathers. I have some sense of what a father might feel to have his children ripped away, and I tell you that no one of moral feeling, and certainly no one with a Christian conscience, should entertain the thought without being filled with zeal for justice. Unjustified state violation of the integrity of the family is transgression of one of the most basic principles of social ethics: subsidiarity. And when subsidiarity is violated with regard to families, maternal and paternal care is destroyed and new life is endangered at the root.

A few months ago, I noted (concerning the tragedy of Alfie Evans) that, regardless of the complexity of the medical issues involved, the principle of subsidiarity cannot be abrogated except under the most extreme of situations. The nation-state, the supreme artifice of modernity, is, I believe, a necessary thing, a good thing, but it is also a dangerous thing, given the chthonic pull of nationalism (not to be conflated with patriotism) and the totalitarian tendencies of the bureaucratic administration of life. Without subsidiarity, the state (and the atomized populace of such a state), forget the most basic human decencies and the most basic hedges on popular/bureaucratic overreach. These are perilous times for basic human rights, and a child’s right to live and flourish requires remembering that the modern nation is no sacrosanct god and there are rights no power on earth may violate (the right to life, the right to freedom of conscience, etc.) So, we must also bear in mind the artificiality of the nation-state when thinking about borders, because the free movement of people is an ab-original right, absolutely pre-dating the emergence of the nation.

Of course MCFL takes no position on the specifics of immigration reform. But it is every pro-lifer’s responsibility to maintain the inviolability of subsidiarity, and preeminently when it comes to the right of familial integrity over against state claims. Certainly, subsidiarity cannot be usurped by the state for something so far down the line of positive law (versus the human rights of natural law) as the maintenance of borders.

As Pope Leo XIII puts it in Rerum novarum: “Provided, therefore, the limits which are prescribed by the very purposes for which it exists be not transgressed, the family has at least equal rights with the State in the choice and pursuit of the things needful to its preservation and its just liberty. We say, ‘at least equal rights’; for, inasmuch as the domestic household is antecedent, as well in idea as in fact, to the gathering of men into a community, the family must necessarily have rights and duties which are prior to those of the community, and founded more immediately in nature. If the citizens, if the families on entering into association and fellowship, were to experience hindrance in a commonwealth instead of help, and were to find their rights attacked instead of being upheld, society would rightly be an object of detestation rather than of desire.

“The contention, then, that the civil government should at its option intrude into and exercise intimate control over the family and the household is a great and pernicious error. True, if a family finds itself in exceeding distress, utterly deprived of the counsel of friends, and without any prospect of extricating itself, it is right that extreme necessity be met by public aid, since each family is a part of the commonwealth. In like manner, if within the precincts of the household there occur grave disturbance of mutual rights, public authority should intervene to force each party to yield to the other its proper due; for this is not to deprive citizens of their rights, but justly and properly to safeguard and strengthen them. But the rulers of the commonwealth must go no further; here, nature bids them stop. Paternal authority can be neither abolished nor absorbed by the State; for it has the same source as human life itself.”

Family integrity, and parental care, have everything to do with the sanctity of human life, its creation and its development. You can’t honor one without honoring the other.

It is also incumbent upon pro-lifers, given the actual political pathways open to us, to note that allowing the Republican Party to collapse into racism and xenophobia would be a disaster for the pro-life cause as a civic movement strictly speaking. Obviously, a pro-lifer cannot support a racist party, and given that the Democratic Party is zealously committed to the legal right to privately execute unborn children, we cannot allow demagogically fanned racism fester among Republicans.

A father’s heart keeps growing with the gestation and birth and raising of his children. It grows and grows within and towards the limitless horizons of the good Father’s love, Who looks upon all the dwellers of the earth with care. Life requires expansive and expanding love in the heart of fathers.