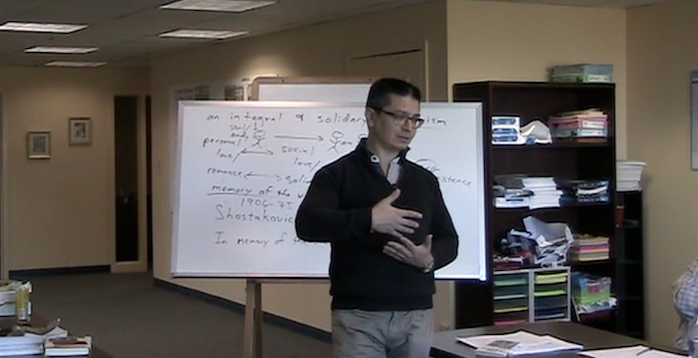 MCFL chairman Dr. David Franks is now teaching an innovative new course, open to everyone, that seeks to rebuild the American future by cultivating a unifying social consciousness from the pro-life perspective. It draws on Scripture and theology, philosophy, political theory, American history, and literature. As of the printing of this issue of the Member Magazine, the inaugural class of students has just met for its third monthly session. (They have also met in January now.)

The pro-life defense of dignity grounds an understanding of the conditions that promote true human freedom. Dr. Franks prepares his students to grasp the impulses behind, and ramifications of, the American proposition: that government exists to secure the God-given rights of life, liberty, and the pursuit of happiness.

The first session of Franks's program in October cited Pope Benedict's 2010 Lenten Message to explain “political theology,” that is, the political implications of the Kingdom of God: the consequences of the justice or justification created by Jesus’ self-sacrificial love. “We understand politics as bringing into society the loving justice that flows from the justice of God worked on the Cross and manifested in Christian faith and love. The classical definition of justice is 'to render every man what is his due.' However, this definition doesn't specify what is due. Pope Benedict explains that man needs more than law. He needs a gift, the love of God. What does this love entail?”

“A genuine understanding of love means we cannot walk over the bodies of others in the quest for justice, as rationalized by political theories such as Marxism,” Franks said. “Marxism only sees the material needs that must be met; it doesn't see love. Without love, we can't even get material needs right.”

Pro-life advocates must come to accept that they cannot completely and immediately fix everything that is damaged by evil. “We need to feel revolutionary fire at the bleeding injustice of children being killed, but resist being overwhelmed in the face of all those children we cannot save,” he said. “The key to this is a serene urgency. We have to feel urgent at every moment, but also have a serenity that comes from trust in God.”

He also noted that a republic exists as a way for citizens to stand together as one in solidarity, which is a stance of “pro-existence,” of living and acting for the good of others: the very truth of freedom. Abraham Lincoln, in his Gettysburg Address, cites the Declaration of Independence to claim that our country was “conceived in liberty.” A “new birth of freedom” would result from this conception. Franks noted, “The conception found in the Declaration of Independence needs to come to birth as a defense of every single human life. The Declaration, as our founding law, is ‘dedicated to the proposition that all men are created equal.’ This is the whole basis of a democratic republic: every human being is equal under the law.”

Franks cited Lincoln, who combined a burning desire to end slavery with a refusal to be a “burn it all down” abolitionist, to illuminate pro-life political strategy. “Lincoln wanted to put slavery ‘in the ultimate course of extinction,’ by advancing the newly formed Republican Party’s platform to outlaw slavery in the territories. This incrementalist approach is similar to that of the pro-life movement. We are all abolitionists in intention. We want to see abortion completely destroyed. But prudence and humility require us to play by the constitutional rules of the republic. Our responsibility is to convince our fellow citizens that a civilized society cannot tolerate abortion without existential contradiction. Incrementalist laws, such as limiting abortion when a fetus can feel pain, are just and prudentially necessary means to realize our love for the powerless, as well as for the common good as a whole.”

“In speaking of the memory of the dead at Gettysburg, Lincoln said that their memory has to be kept alive if we are going to have a future,” Dr. Franks continued. “We remember the inhumanity of the past in order to bring it about that there be less inhumanity in the future. Lincoln assured us that a new birth of freedom was possible by honoring the dead. Our increasing devotion to their memory would ensure they had not died in vain.”

“That's the same issue we have right now, conceived in the same principles that Lincoln acknowledged,” Franks said. “Will we recognize as an American people that ‘all human beings are created equal, are endowed by their Creator with certain inalienable rights’? Will we see a ‘new birth of freedom’ in which that basic republican principle is acknowledged?”

The first session ended with encouragement. “Our solidary hope is the great proof of the pro-life movement’s greatness. Pro-lifers are acting for someone else. We are completely given over to the protection of a social class that is not ours. The end of legal abortion doesn't do anything for us; it's saving others. There's nothing in it for us; it is for others who are suffering. That's a powerful way to show the credibility of this great cause.”

Find out more about the Pro-life Social Doctrine Certificate Program, which meets one Saturday per month at MCFL’s Charlestown offices.