A New Hippocratic Oath Removes Protection of Life “From Conception” 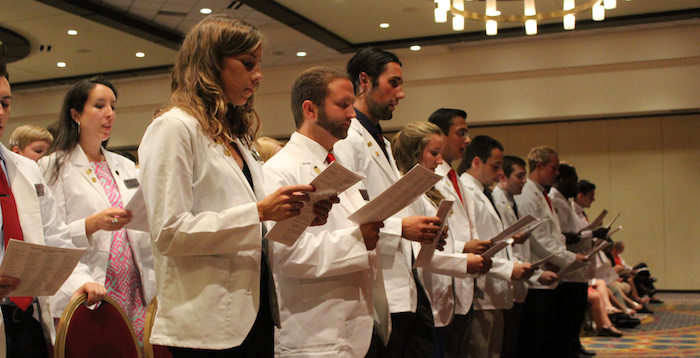 A modern successor to the Hippocratic Oath for physicians around the world has been approved by the World Medical Association. This is the first revision in a decade and reflects changes in the climate of medical ethics.

First of all, the “Declaration of Geneva” is to be called, not an “oath”, but a “pledge”. The most striking change is the emphasis on patient autonomy. A clause has been inserted into the 2017 version which says, “I will respect the autonomy and dignity of my patient.”

A somewhat unusual new clause requires doctors to look after their own health: “I will attend to my own health, well-being, and abilities in order to provide care of the highest standard”.

There is a new obligation on physicians to share their knowledge for the benefit of their patients and for the advancement of healthcare.

The current Declaration of Geneva is used across the world by physicians. In many countries it is actually part of the medical professional code and in some it is legally binding. However, in other countries it is either not used at all or has been adapted. The revised pledge is supposed to be a global ethical code for all physicians. WMA President Dr Yoshitake Yokokura said:

“The life of physicians today is completely different to what it was in 1948 when the original Declaration of Geneva was adopted. Since then, the Declaration has become a core document of medical ethics and a modern version of the 2,500-year old Hippocratic Oath. We hope that the Declaration approved today will be used by all physicians around the world to strengthen the profession’s determination to maintain the highest standard of health care for patients.”

It is interesting to compare the 2017 version with the 1948 version. In many respects they are strikingly different.

1948: I will maintain the utmost respect for human life from the time of conception

2017: I will maintain the utmost respect for human life.

1948: even under threat, I will not use my medical knowledge contrary to the laws of humanity

2017: I will not use my medical knowledge to violate human rights and civil liberties, even under threat.

1948: I will maintain by all the means in my power, the honor and the noble traditions of the medical profession; my colleagues will be my brothers

2017: I will foster the honour and noble traditions of the medical profession

Here is the complete text of the 2017 version:

AS A MEMBER OF THE MEDICAL PROFESSION:

I SOLEMNLY PLEDGE to dedicate my life to the service of humanity;

THE HEALTH AND WELL-BEING OF MY PATIENT will be my first consideration;

I WILL RESPECT the autonomy and dignity of my patient;

I WILL MAINTAIN the utmost respect for human life;

I WILL NOT PERMIT considerations of age, disease or disability, creed, ethnic origin, gender, nationality, political affiliation, race, sexual orientation, social standing, or any other factor to intervene between my duty and my patient;

I WILL RESPECT the secrets that are confided in me, even after the patient has died;

I WILL PRACTISE my profession with conscience and dignity and in accordance with good medical practice;

I WILL FOSTER the honour and noble traditions of the medical profession;

I WILL GIVE to my teachers, colleagues, and students the respect and gratitude that is their due;

I WILL SHARE my medical knowledge for the benefit of the patient and the advancement of healthcare;

I WILL ATTEND TO my own health, well-being, and abilities in order to provide care of the highest standard;

I WILL NOT USE my medical knowledge to violate human rights and civil liberties, even under threat;

I MAKE THESE PROMISES solemnly, freely, and upon my honour.

This article originally appeared on the website BioEdge.org. The opinions and assertions are those of the original author and do not necessarily reflect the opinions of Massachusetts Citizens for Life, its staff, or board. The article is reprinted under a Creative Commons license.