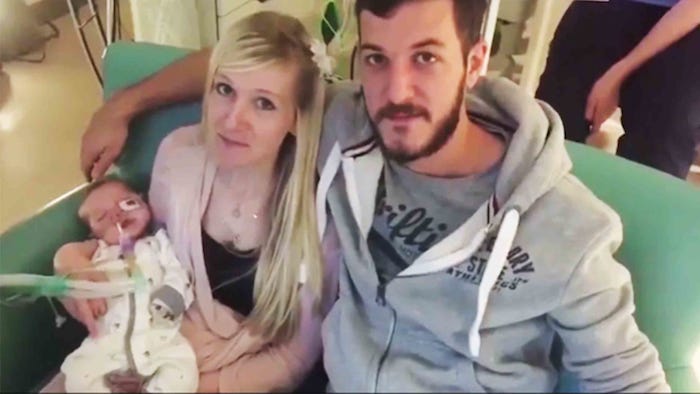 Last August, I wrote a blog titled “Parent Power” about the efforts by some legislators in Missouri and Kansas to block the passage of Simon’s Law, a bill that exposed and sought to change the secret futility policies in even some Catholic hospitals that led to the death of Simon Crosier, a baby born with Trisomy 18.

Since that blog, Kansas finally did pass Simon’s Law but in Simon’s home state of Missouri, the bill is still stuck in committee even though new information about the life expectancy and prognosis for such children led to an opinion editorial in the prestigious Journal of the American Medical Association (JAMA) admitting that withholding life-sustaining treatment from babies with Trisomy 13 and 18 was really a value judgment rather than a medical judgment.

The fight for Missouri’s Simon’s Law will continue.

On June 30, 2017, the parents of 11 month old Charlie Gard lost their appeal to European Court of Human Rights to keep their son with a rare genetic disorder on life support and take him to the US to try an experimental treatment. The appeal was filed after Britain’s Supreme Court decided to let the hospital remove Baby Charlie’s life support, finding that prolonging Charlie’s life was “not in his best interests.”

Baby Charlie has a rare genetic disorder affecting his muscles and brain that has caused  brain damage, seizures and prevents him from breathing on his own. A neurologist in the US has suggested an experimental nucleoside treatment that might, in theory, offer some benefit although the treatment has not been tried before in a situation like Baby Charlie’s.

On Facebook, Charlie’s parents said that they were “heartbroken” and aghast that the hospital would not even allow them to take their son home to die.

Charlie’s parents have been fighting for months for the right to take their son to the US try this experimental treatment. By the time of the court decision, $1.7 million had been raise through crowdfunding media to cover expenses.

Unlike the Simon Crosier case, the withdrawal of treatment decision by the hospital was not secret.

The Charlie Gard case has caused enormous conflict among ethicists, lawyers and even religious leaders across the world as well as the general public.

However, in the last few days, Baby Charlie and his parents gained support from two important people: Pope Francis and US President Donald J. Trump.

At first, a Vatican official issued a statement on Baby Charlie that “We must do what advances the health of the patient, but we must also accept the limits of medicine and, as stated in paragraph 65 of the Encyclical Evangelium Vitae, avoid aggressive medical procedures that are disproportionate to any expected results or excessively burdensome to the patient or the family.” But a few days later and after much criticism of the first statement, Pope Francis expressed hope that the desire of 10-month-old Charlie Gard’s parents “to accompany and care for their own child to the end” will be respected. (Emphasis added)

Then, after a July 3, 2017 offer by President Trump to help, an unnamed US hospital came forward to offer free treatment to Baby Charlie.

If Charlie receives this treatment and it does work like the Dr in America thinks, it won’t be just Charlie’s life that has been saved, it will be many more children in the future, who are born with this horrible disease and it will open up other trials on other mitochondrial depletion syndrome’s.

Over my decades of nursing experience, I have seen people decide to try experimental treatments because they hoped for a cure, improvement or at least to help doctors learn more that may help someone else later.

Sometimes the treatments worked and sometimes they didn’t but after talking with these patients (or parents), I could not help but admire their love, courage, faith and determination.

May God bless Baby Charlie, Baby Simon and their parents!